The Rocker - Worst Rock Movie Ever? 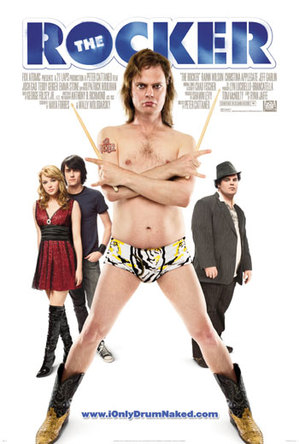 I can forgive the premise of a Pete Best type story of a drummer who gets booted from his band just before their career takes off and then 20 years later takes up with some high school kids to give it another shot.  And I can forgive the pop pastiche songs, which were better than I had feared.  But what can't be forgiven is that there's no humor in this movie.  The writing is without humor or dramatic tension.  So what you're left with is the equivalent of a Disney after school special.  What's worse is the movie has a great cast with SNL and 30 Rock alumni including Jason Sudeikis as the slimey record company rep, camoes by Amy Poehler, and Fred Armisen, Will Arnett and Lonny Ross who make up the fictional Vesuvius in the style of GnR.  Unfortunately, the funniest people in the movie have a total of about 6 lines and not a single joke between them.  All tolled there are maybe 2 decent jokes in the entire movie.  One features Pete Best though it's not even clear until you see the credits.

This is a dud of a movie.  Don't go see it and don't even rent it on DVD.  Just avoid it.  If you want a great rock comedy movie, check out Spinal Tap, Still Crazy, my favorite of the genre.