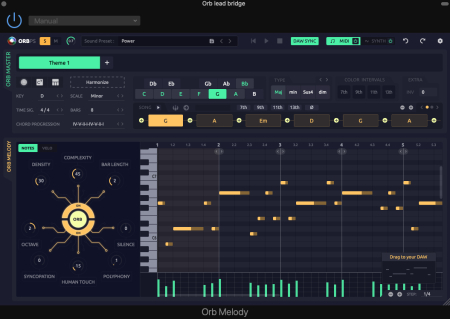 I've been using Logic Pro for a few years now (and GarageBand before that) and have always marveled at how good the Drummer function is. You can choose one of several styles (Rock, R&B, Songwriter...) then pick a drummer (Duncan, Logan, Kyle...) and you get a great drum track that sounds like a human. You can have the drummer track follow another track (typically the bass track) and there are controls to adjust the volume / complexity, fills, etc. I used the Drummer feature extensively on my rock opera and it sounds like a real drummer, even to my drummer friends. (Added bonus: at least one person is playing in time!)

I've wondered why there aren't additional features like this for automatic accompaniment, like Band-in-a-Box but with a user interface from the 21st century. (Yes, Band-in-a-Box pioneered this approach, but they seem to delight in cramming more and more features and musical styles over several decades making the product somewhat byzantine.)

To my delight, I recently discovered Hexachords Orb Producer Suite 2.0. It's a series of four inter-connected plug-ins: Orb Chords, Orb Bass, Orb Arpeggio and Orb Melody all for 99 EUR. The suite operates as VST plug-ins and work with any major DAW. I took it out for a spin this weekend and found it to be a great experience. 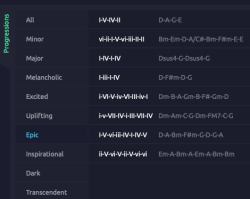 What the Orb Producer Suite does is automatically generate musical patterns. You can pick from categories of Chord Progressions (minor, major, epic, dark, uplifting...), set the key, tempo, how many bars and then Orb does the rest. If you don't like what it comes up with, you can adjust several parameters (density, complexity, polyphony, spread...) or just re-generate again until you get something you like. I went for a pretty straightforward I-V-IV-II main chord sequence in the key of D, that is D A G E. Once you've set the chord sequence, whenever you generate a bass, arpeggios or melody it will lock-in with the chords and scale you've set. 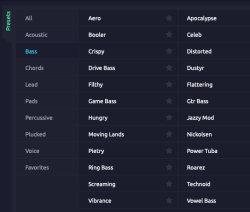 The Orb Producer Suite includes a pretty decent wavetable synth with dozens of worthwhile presets. I opted not to use the synth except to evaluate the parts, and once I got something I liked, I dragged and dropped it into Logic Pro and used its built-in synths and MIDI instruments.

Of course, some of what Orb Producer Suite generates sounds awful, but with a bit of adjustment you can get something that sounds quite good. In fact, about 95% of this song was generated by Orb Producer Suite. I made a few adjustments to the MIDI tracks to vary the solo with a few staccato notes and to make the horn stabs sound more, ah, horn-like. But the bass track, the arpeggios are all 100% as generated.

The end result may or may not be your cup of meat, but I can honestly say, it's unlikely I could have come up with the melody on my own. My contribution (other than the slight changes to the MIDI) was in deciding which of the dozens of generated parts sounded good and then picking the appropriate arrangement in Logic Pro including the instruments, effects, mix, adding a bridge, adding horns and strings (also generated by Orb Producer Suite), adding a Drummer track, and so on. 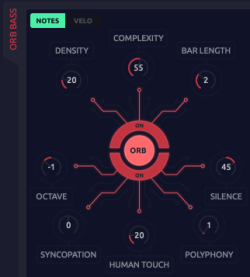 Orb Producer Suite claims to be AI-powered, which might be true, or it might be marketing speak for some basic if-then-else logic about what chords or notes go well together.

Some of the melodies or bass parts generated by Orb Producer seemed more random than musical to me, but clicking again or adjusting the parameters helped me narrow in to the kind of pattern that I wanted. I look forward to working more with Orb Producer to help me break out the usual I-IV-V  / pentatonic rut that I often find myself in.

While Orb Producer Suite works great, Hexachords has a bit of a mixed reputation. They had previously shipped a comprehensive AI-powered DAW called Orb Composer which, while very powerful, also was apparently rather buggy. I think they are turning around their reputation with the Orb Producer Suite. I found no major problems while using it in Logic Pro. (It stuttered a few times on playback, repeating the first bar, and I had to restart Logic pro once.)

Sadly, it looks like Orb Composer is currently no longer supported by the company. I'm hoping they create a new more full-featured version of Orb Composer that builds on what they've shipped with Orb Producer Suite 2.0.

What do you think? Can AI help humans compose music? Have you tried any other generative music programs? Let me know in the comments below.

(Update: I added a few more tracks on Soundcloud in different styles.)

Have you got tired of anything? Let's play guitar » or piano online ». Guitaa » Provides a wide collection of all the popular songs. Visit our website for more information- https://www.guitaa.com/

I have a passion for crafting and crocheting and offer my patterns and tutorials for free! I hope you enjoy everything you find here and please feel free to repeat after me! http://www.varshachowdary.com/