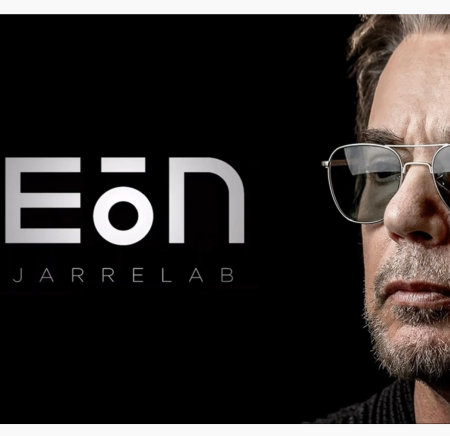 I must admit, I've fallen down the rabbit hole into synth nerdvana lately. I'm not sure, maybe it was with Daft Punk's demise, and a Sound Opinions podcast that mentioned French synth pioneer Jean-Michel Jarre. I was vaguely familiar with Jarre's breakthrough 1976 instrumental album Oxygène. I was mostly listening to classic rock back then, before the 1977 new wave / punk tidal wave from the UK. Somehow, Jarre's work never really surfaced again for me, despite my recent interest in the Krautrock Motorik synth sound of Krafwerk, Neu! and similar proggy instrumental artists like Mike Oldfield and Tangerine Dream.

A bit of research revealed that Jean-Michel Jarre (or JMJ as he's known), despite turning 72, has remained prolific for 50 years with Guinness record-breaking concerts in Paris, Houston, China and Moscow. More interesting, he'd continued to delve into new technologies including including Virtual Reality and releasing a generative music application called EōN.

EōN is basically an infinite album. It's based on seven hours of Jarre's work, presumably thousands of samples, that get combined into unique, unrepeated songs.  The app is $9 on iOS and twice that (!) on Mac OS. An Android version is in the works. The app runs offline without internet connection and requires little battery power to run in the background.

I cannot recommend this app enough. For anyone interested in generative music, or synth music in general, this is an amazing application. It generates unique and interesting instrumental music. Of course, whether you like the app will depend on whether you like Jean-Michel Jarre. Personally, I find it fascinating and I've been listening to it non-stop. The music ranges from ambient background synth pads to light industrial / techno EDM.

I have listened to EōN for more than 100 hours at this point and I can't say I've heard anything repeat. I will occasionally recognize an ambient sound (variations of water flowing) or a particular clacking drum sound, but that's it. The app also generates some interesting trippy graphic patterns, though mostly I'm using this with the display off.

I find EōN is great for background music while working, writing, reading, running, driving, you name it. Tracks mostly blend together seamlessly, but once in a while (maybe 2-3 times so far) I've found a song doesn't work for me, in which case you just hit the "next" button and move on to something else.

You can find some samples on Youtube and there's also a limited edition Snapshots of EON album. (Though it costs way more than the application, so I'm not sure why you would want that.)

I find EŌN to be much more interesting and compelling music than other generative music applications I've seen. It's got a mix of styles, textures, beats, instruments and effects that keeps me engaged. Brian Eno has certainly done some pioneering work in this area and his apps are more interactive, but the music is, frankly, boring. (Of course, that's a matter of taste. Some people like Music for Airports.)

The EŌN app was developed in conjunction with iOS synth developers BLEASS systems who built the audio engine and audio algorithms. The graphics were developed with Sony Computer Science Laboratories in Tokyo.

My only wish is that the application had just a hint of interactivity. For example, I would find it interesting to know how many hours or songs I've played. Presumably songs could be recreated with a unique seed and it would be cool if you could share your favorites with other users of the app or recall them later, perhaps generating interesting random names. As it stands you can record 30 second fragments in realtime, but once a song has played, it's gone. And if you were connected, it would be fantastic to see a map of other EON listeners and somehow share your favorites or vote on tracks.

What's clear is that despite the lack of interactivity (or perhaps because of it) you are listening to music that has been designed by JMJ himself. I'm fascinated to understand what kind of rules are behind the generation. Does he build songs up from the bass line and/or rhythm? Are sound samples modified at runtime? How is the instrumentation determined? How does one song evolve into another?

I would love there to be a more general-purpose generative application from BLEASS that exposed more of the rules, perhaps with other artists samples. One can easily imagine a Kraftwerk or Neu! flavored application that generated Motorik music. Or heck, why not an app where you could load your own samples into a massive library, control the instruments and create your own rules. Zappa created a technique called Xenochrony where he re-purposed guitar solos into different songs to interesting effect. Why not do that for any instrument or sample? Just imagine what you could generate with samples from Erik Norlander on the Uno Synth Pro.

EŌN opens up a fascinating new era of generative music and is a new milestone in the creative arts.

Wow. Nice! I remember Jarre but haven't listened to any of his stuff in ages. I just downloaded the EoN app to give it a try and it's quite good.

This is wonderful. I think even Brian Eno would approve!