In Praise of Low-Cost Synths

Sometimes I try to put a moratorium on buying new gear. It lasts for maybe 12 months and then something pops up and I'm like a weight-watcher walking into a pie shop. Lately, I've become intrigued by low-cost portable synthesizers. It all began with a Christmas gift of a Teenage Engineering Pocket Operator. This was like receiving a puppy; it's a gateway into more gear. If you're debating the merits of a Prophet 5 versus Oberheim for integrating with Eurorack, this blog post is not for you. But if you're synth-curious, read on to learn about your options.

The ideal first synth would be battery powered, include a speaker, have a built-in keyboard, full MIDI support, a modern sequencer, arpeggiator, polyphonic ability, a fat multi-oscillator sound, built-in presets, knobs and sliders, learnable in ten minutes and cost under $100. While nothing meets all those criteria perfect, some get surprisingly close. None of these are going to compete with intermediate-level synths in terms of features or build quality, but they're all great for learning, experimenting and creating happy musical accidents. Let's take a look, starting with our cheapest option and working up. 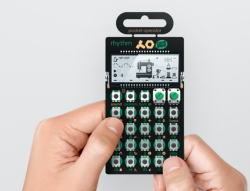 Swedish design firm Teenage Engineering launched their Pocket Operator line of barebones mini-synths back in 2015. These are calculator-sized AAA battery-powered devices ranging in price from $49-89. It's basically a printed circuit board that generates retro synth sounds with a tiny on-board speaker and a range of built-in effects (filters, distortion, stutter, delay, etc.) which vary depending on the model. There are now 10 different models (drums, bass, lead, noise, robot, sampler, arcade sounds, etc.), all with the same form factor, 16-step sequencer and a couple of control knobs. You can chain sequences together to create songs, but for most users, it's more like a fun lo-fi toy than a super expressive instrument.

You can buy a case to make it a bit more rugged and you can combine several together or with Volcas to get some interesting, if quirky, sounds. But keep in mind, they are definitely addictive. if you buy several, you may be better off putting the $$$ towards a Volca or Uno synth. 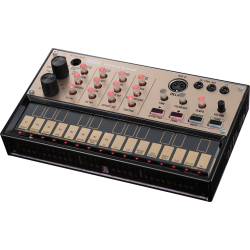 I recently picked up a used Korg Volca Keys analog synth on Reverb. While it's not the most refined synth around, it is definitely a ton of fun. First introduced in 2014 (along with the Volca Bass and Volca Beats drum machine) there are now 8 models including Volca FM, Volca Sample and even the Volca Modular for that crazy west-coast science fiction sound with tiny patch cables. All the Volcas have the same compact form factor and range in price from $150-200. They are all battery powered (or optional 9V DC adapter) and they all have a simple ribbon keyboard, a primitive sequencer and plenty of knobs and dials. You can use an external MIDI keyboard (cable not included) or headphones and you can sync multiple Volcas together.

I rate the Volcas high on the fun factor, and the sounds they produce are interesting, fat and squelchy (in a positive way). That said, they are showing their age. There are no presets, so finding your way back to a sound you like is problematic or part of the fun, depending on how you think about it. There's no built-in arpeggiator. The Volca Keys is paraphonic (you can hold three notes) while the Bass is monophonic (you can only play single note at a time).

There's a lot to like in the Volcas. They're great ways to learn the ins and outs of analog synths. And they're cheap enough that if you buy one and outgrow it, it's not a major cost. (Hello, Reverb!) You can find them used for $110-150 depending on the model. 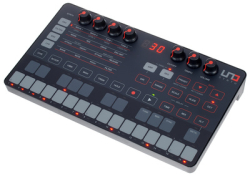 The Uno Synth was my first synth and I can recommend this for anyone who wants to get started in this field. List price is $200 and you can find them used for $150 or less on Reverb or eBay. The Uno is a modern take on a budget analog synth, and perfectly targets the synth newbie. It's battery powered, has a rich, buzzy John Carpenter / Stranger things sound, a hundred presets, built-in flat but effective capacitive keyboard, very good arpeggiator (up, down, reverse, multiple octaves), and an excellent modern sequencer that lets you record in real-time or in step mode, recording effects also. Some of the effects (delay, drive, tremolo, wah) are a bit underwhelming as there's no mod or pitch wheel, but they can still be used to add some expressiveness. The only thing it's missing is a built-in speaker, which will probably be appreciated by your spouse or roommates anyways. There's also an Uno Drum machine with a similar user interface and sequencer and the two can be connected together, much like Volcas.

At NAMM 2021, IK Multimedia announced new Uno Pro and Uno Pro desktop synths that add more power, more filters, more presets, more sounds, better effects as well as pitch and mod controls. At $400 the Uno Pro Desktop is more of an intermediate level device and there's a higher-end version with a full Fatar keybed for $649. So if you like the original Uno, there's plenty of room to grow within the product line. (I'll be posting an exclusive interview with synth designer and IK Multimedia product manager Erik Norlander about the Uno Pro later this month.) 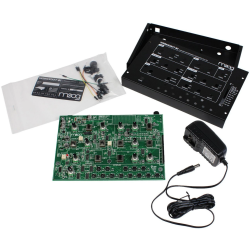 This next one is definitely not for everyone. In 2014, at the annual MoogFest conference, Moog had a hands-on build a synth session. Later because of demand, they issued a commercial kit in limited quantity. And then in late 2020 a new version of the Werkstatt-01 kit with a CV expansion bay was released, again in limited supply. It's by no means the perfect synthesizer, but it's the best DIY synth kit you can find and good as a learning tool. You can build it in under 20 minutes with just a Philips screwdriver. You get a beefy monophonic single oscillator dual filter Moog sound with a fairly easy set of controls, and tiny 13 button keypad in a solid metal case. That said, there are no bells & whistles: no presets, no sequencer, no arpeggiator and no MIDI support. But still, it's a Moog for $200!

Since it's a modular synth, you've got a patch bay and patch cords that can further customize the sound in all kinds of weird science fiction ways. You can also connect it to an external keyboard like the Arturia Keystep via CV patch chord. I wish it had a built-in speaker and battery power, which would make it more fun to have on your desk. Still, if the idea of building a kit is intriguing, go for it! 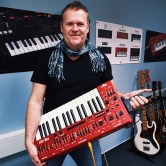 Behringer is sometimes (ok often) criticized for issuing clones of vintage synths. I have no problem with this as a business model as these older units are out of production, expensive and no longer covered by patents. That said, I think there's a lot of improvements that we've seen with more modern instruments which are mostly missing from the Behringer clones. For example, you don't always get presets, or a modern step sequencer.

Behringer has issued a lot of synths, but the one I think is most interesting for a newcomer is the MS-1 which is basically a clone of the the Roland SH-101.  It's an analog monosynth with a growly sound made famous in the 80s and '90s. It's not battery-powered, but it does have a decent keyboard and a vintage sequencer and arpeggiator. If you're a fan of the original but don't have two grand to splurge, a recent price cut from Behringer brings it's clone in at $300, which is the synth bargain of the century. And like the original, it comes with a hand-grip and guitar strap, so you can rock it like an 80's keytar, mullet and scarf optional. 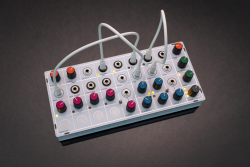 This last one is more of an intermediate level synth than budget, but in the world of modular west-coast synths (e.g. with patch cables) it's pretty unique. Technically, the Pluto synth is still in pre-production but they have done a couple of early runs and have been selling out at $450. So it's not really for beginners, but it's unique and worth considering as a second or third synth. Interest in this synth could also indicate you are likely to buy three or more synths in as many years.

The Pluto is modular, so not much happens until you plug in some patch cables, but compared to most of the modular synths I've seen it's way more musical. If the idea of creating semi-automated Brian Eno style sounds is interesting, this may be the synth you've dreamed of. It's small, cute, and has a re-chargeable battery. No presets, no speaker, only a four button keypad, but wow, that sound.

What are your thoughts on the Pluto or any of the synthesizers mentioned here? Add a comment to let me know what you think.