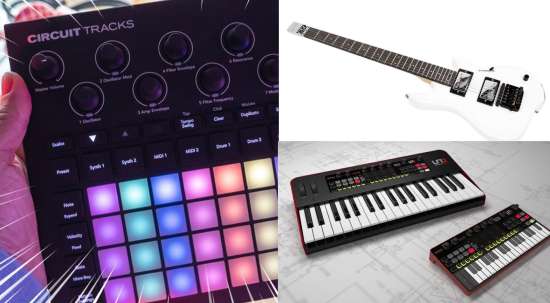 Looks like 2021 is starting with a ton of new announcements from NAMM and beyond. I've picked three new products to highlight here, all of which represent significant innovation in the musical instrument market. 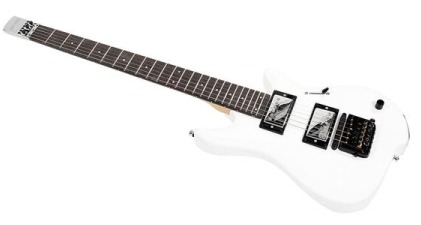 Many readers are probably aware of Zivix original products the JamStik and JamStik+. These were innovative MIDI controllers that resembled guitars, but had only 7 frets. They were portable, lightweight and great for learning guitar, but not really suited to an experienced player.

Last year Zivix launched their JamStik Studio Guitar. It's now a proper full-size neck (24 frets, 25.5" scale) headless electric guitar with a custom-designed built-in MIDI pickup in addition to the two humbucker pickups. It's gotten great reviews and they continue to update the companion Jamstik Creator software regularly. So now if you know your way around a guitar, you can control any MIDI synth --hardware or software. The creator software tracks chords, single notes, double stops, bends, slides, hammer-ons, pull-offs, you name it. You want to have your arpeggio guitar parts translated into '90s synth bass? No problem. Horn section? Why not? Run it through your favorite synth VSTs? Sure. Because it's a full-blown electric guitar, you can also blend the original guitar sound with whatever synth craziness you want, playing or recording both the electric guitar and synth sound in real-time. Whoah!

This is the most innovative invention for guitar players since Line 6 came on strong many years ago. I'm excited to see where Zivix takes this in the future. At $799, it's definitely not the cheapest guitar you'll buy, but it is definitely the best MIDI guitar controller ever to hit the market. 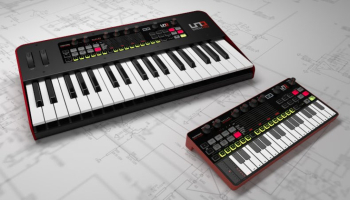 I've been a fan of IK Multimedia since the original iRig guitar interface. They've continued to move up-market over the years with high quality interfaces, reasonably priced MIDI keyboard controllers and a ton of software. In 2018, they announced the UNO Synth, followed by the UNO Drum. The UNO synth is an easy-to-use analog mono-synth with rich, fat sounds, 100 presets, all in a battery (or USB) powered portable package. With a price of under $200 it was a bargain and a perfect first synth for newbies. Of course, to hit the that price point, there were some compromises. Chief among these was the keyboard, which is, well, not a keyboard at all. It's a flat surface capacitive touch controller, meaning you tap on the surface like you would on a phone or tablet.

Just as I was starting to wonder who would out-innovate the original UNO synth, IK Multimedia announced the forthcoming UNO Synth Pro and Uno Synth Pro Desktop. The desktop continues with the capacitive touch keyboard, whereas the pro offers a world-class 37 key Fatar keybed. Both models offer an improved dual-filter, three oscillator sound engine, a dozen built-in effects including reverb, delay, overdrive, more arpeggiator options, 256 presets, a longer 64 step sequencer, song mode and more. The new model is also paraphonic, so you can play 3 notes at a time. (It's not a true polysynth, but it's good enough for triad chords and pads.) The new models are more expensive clocking in at $399 for the desktop and $649 for the larger version with the Fatar keyboard.

I'm looking forward to learning more about how synth designer Erik Norlander has incorporated the latest SSI filter to open up a richer sound palette. 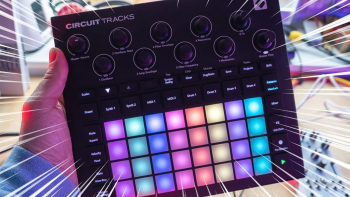 Last up, this week Novation announced a new version of their Circuit groovebox. The new version uses the same Nova synth engine, and adds more flexibility for controlling outboard synths, an improved sequencer, a built-in rechargeable battery and better usability. There are also more built-in effects and a mixer.

Sadly, there's still no on-board LCD display, which I think is a drawback for some users. But they seem to know their audience. If you want to compose EDM or chill beats without firing up your DAW, this is a great all-in-one tool and definitely the easiest-to-use groovebox on the market.

The new version lists for $399, a slight increase over the prior model.

Let me know what you think of these devices and what other cool gear you've seen come on the market.

Love the Jamstick info. And Zack you were always about the "fret". Glad to see you giving some MN love... talking of love they have a Velentines special on Midis. :HEART:

and, I remember the good old days when I could spell Valentine

Great writeup! lots of new stuff coming out. 24 frets on the MIDI guitar is a welcome edition

I need to try that JamStik--it seems like the ideal office/travel guitar for laying out songs and parts.

Oh nice. I've been thinking of getting a Jamstick. Interesting to see that you can now upgrade to a full sized neck. UNOs look slick also.