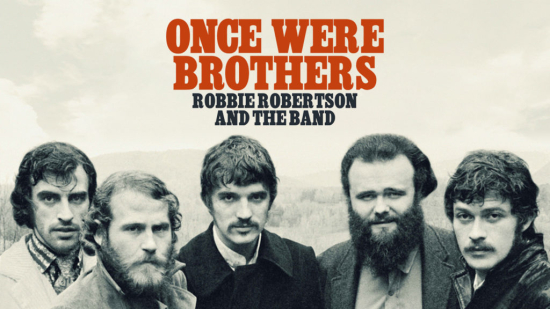 A few months back, Robbie Robertson released "Once Were Brothers" a biography of The Band, adapted from his autobiography "Testimony." As with any good rock doc, it's a bittersweet story of the rise to stardom, fame and fortune followed by an inevitable decline.

If you're at all interested in this story, you might know a little bit about The Band already, including backing Bob Dylan on his infamous 1966 world tour where he "went electric" to a chorus of boos every night from the die-hard folk fans. The roots of The Band go back earlier than that, though. It was formed by four Canadians from Southwest Ontario (Robbie Robertson, Rick Danko, Garth Hudson, Richard Manuel), who joined up with Arkansas drummer Levon Helm to become the backing band for rockabilly star Ronnie Hawkins in the early 1960s.

The Band had its moment in the limelight in the late 1960s through the mid 70s. Their music created the American genre of music, as ironic as that is. Their first three albums stand the test of time with such classic songs as: The Weight, Stage Fright, The Night They Drove Old Dixie Down, King Harvest. They influenced artists as diverse as George Harrison, the Rolling Stones, the Grateful Dead, Led Zeppelin, Elton John, Elvis Costello, The Wallflowers, the Black Crows, Drive-by Truckers and Paul Kelly. They continue to influence contemporary artists like My Morning Jacket and Nathaniel Rateliff.

The band was together (more or less) for 16 years when Robbie Robertson decided to call it quits with a final concert, what became "The Last Waltz," filmed by Martin Scorsese. As this film makes clear, The Band was heading for destruction due to alcohol and drug issues and Robertson hoped they could take time apart to heal and pull things together. They pulled together an all-star set of musicians including Bob Dylan, Neil Young, Ringo Starr, Van Morrison, Joni Mitchell, Ron Wood, Muddy Waters, Ronnie Hawkins, Neil Diamond and more. The film also includes perhaps the greatest version of their masterpiece The Weight ever recorded with the sublime vocal harmonies of the Staple Singers.

Sadly, the original lineup never played together again, though Manuel, Danko, Helm and Hudson toured without Robertson in the 1980s. Richard Manual sadly hung himself on tour in 1986. The band continued in various configurations in the 90s, but without Robertson's songwriting, the new albums were lackluster. Rick Danko died in 1999 and Levon Helm passed away in 2012.

Robbie Robertson is the only member of the band with contemporary interviews in the film, and it's very much his story. He wasn't the singer, but he was lead guitarist, songwriter and the dominant creative force behind The Band. The film does a good job representing Helm's point of view, who bitterly resented not getting songwriting credits. But as Ronnie Hawkins notes, there's a difference between arranging a song and writing it.

It's very much a story worth watching. It's equal parts inspiring and sobering.