Crack The Sky - The Greatest Band You've Never Heard Of 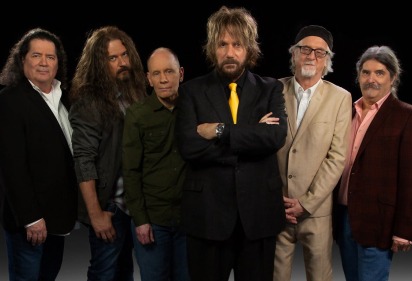 Every couple of years I run into some breathtakingly fantastic band that no one has ever heard of. Often, by the time I find them, they have delved so deep into obscurity that they soon break up. (I'm looking at you BrainPool. And Thunder. And The Hellacopters.) I hope this doesn't happen to my latest discovery, Crack The Sky. This is a band that has been ahead of its time for so long that you sort of give up and think they'll never be famous. But in fact, they are big stars. Well, at least in Baltimore.

Crack The Sky was formed in the early 1970s. They managed to put together some demos and then got picked up by the third-tier label Lifesong. Their self-titled album received rave reviews. Rolling Stone called it the debut album of the year for 1975:

"Like the first albums of Steely Dan, 10cc, and the Tubes, Crack the Sky's debut introduces a group whose vision of mid-'70s ennui is original, humorous and polished..."

The band toured with Supertramp, Foreigner, Yes, Boston, Kansas, Styx, Rush and even Frank Zappa, but never broke into the mainstream. Their songs were too complex for radio and they never had a hit single. Sometimes they got thrown off tours for blowing the headliner off the stage. The band's manager Derek Sutton was the inspiration for the character Ian Faith in the film Spinal Tap. And yes, they really did get lost trying to find their way onto the stage.

So despite a comedy of errors, they managed to build a following and get on the radio in Baltimore. CTS, as they are known among fans, has had its ups and downs over the years, but they've mostly continued recording and touring in the Northeast.

CTS is not to everyone's taste. It's proggy and sometimes overly-complicated. But if you look at the breadth and depth of their music, it is astonishing. Add to that they have been regularly touring and recording new material during most of this time, they are a criminally underrated band. If you like hook-laden classic rock, you owe it to yourself to check out their first album, the self-titled "Crack The Sky," "White Music" or their 2010 concept album "Machine." There are also several very good live albums and DVDs.

I'd argue that all of their albums are good and many are superb. I’ve become obsessed with CTS in recent months. They have the harmonies and hooks of the Beatles, the explosive guitar of Cheap Trick, the heaviness of Pink Floyd, the musical sophistication of Steely Dan, the prog cred of King Crimson with none of the associated prog pretension.

Despite their thematic songwriting, Crack the Sky has never written a rock opera. They had an early attempt to write one to honor the Royal Canadian Mounted Police (I am not making this up), but it didn't get beyond the first song. They've come pretty close with concept albums "Machine"  and "The Sale." So I'm hoping they'll give it another shot. (JP, Rick, I can show you how it's done. I'm Canadian and I'm ready to help.) I'd never heard of the band when I wrote my rock opera Underground Radio, but in some strange time-warp fashion they were a huge inspiration.

I'm not holding out for a live gig in Michigan or California. But if there's one band I would considering getting on a plane to see, it's Crack The Sky. Check out the videos below for great live performances of From The Greenhouse and Hold On / Surf City. There's also a jazzy acoustic version of Surf City filled with Beatle breaks. Unbelievable!