Fiverr and the Quest for Perfect Tab Files 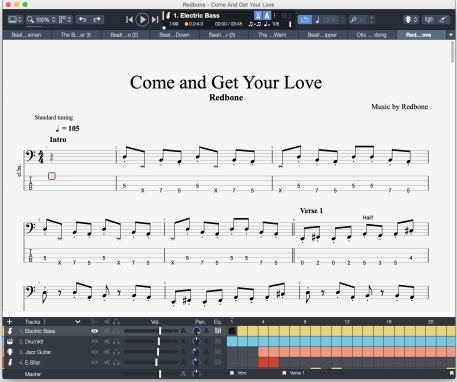 If you don't understand the headline, this post is not for you. But for guitar and bass players who might not be able to figure out a song by ear, a tab file is a musical notation that makes learning songs easy. Tablature is a very old music system which shows where your fingers should be positioned to play a fretted instrument. Though not perfect, tab notation is much easier than reading traditional musical notation with clef bars, treble bars and all those squiggly lines.

In the 1980s, tablature became popular in guitar magazines and music books which published licensed transcriptions of guitar solos in a form that the average guitar player could read. With the rise of the internet 1990s, amateur musicians began posting thousands of their own text-based tablatures. In the early 2000's, Guitar Pro, a brilliant software application from the French company Arobas Music, took things to a whole other level by creating a tool that could not only create tablature files, but it could play the music it represented. You could create and playback all of the different instruments (guitar, bass, drums, piano...), and you could isolate, slow down and loop parts, making it easy to practice new parts.

I've beee using Guitar Pro almost daily for more than 10 years. If you're a musician, you should just click on over to the Guitar Pro site and get a free trial download. It works best on a computer (Windows or Mac) though it is also available for tablet and smartphones.

While you can find most popular music in Guitar Pro file formats (e.g. .gp, .gpx, .gp5 etc) every now and then there will be a song I can't find or whose tab file is terribly wrong. So recently, I used the online task marketplace Fiverr to commission the creation of a couple of new Guitar Pro files. I was blown away by the quality of the work.

These are excellent Guitar Pro (.gp) transcriptions of some admittedly obscure songs:

Come and Get Your Love is a campy early 1970s song that had a well-deserved resurgence in popularity after inclusion in the Guardians of the Galaxy soundtrack. It's impossible to play this song and not have a smile on your face. The guitar chords are straightforward: Em, A, D, Bm repeated in the verse and the chorus.  The bass part is a pretty busy sequence of staccato 8th notes. It's quite a fun funky sound, replete with '70s fashion, wah-wah, cowbell, strings and even a sitar. There's a great story in the Wall Street Journal from earlier this year where Redbone bass player Pat Vega describes the history of the song and how he and his brother Lolly wrote it.

Shama Lama Ding Dong is even more obscure. It was a hit by the fictional band Otis Day & The Knights as portrayed in the 1978 film Animal House. It's an homage to early R&B and rock songs of that era. Little known fact: Robert Cray plays bass in the film.

In addition to the Guitar Pro app, Arobas offers MySongBook, an online store where you can buy songs or a subscription. There are also many free Guitar Pro files available online at GproTab.net, GuitarProTabs.org, GuitarProTabs.net, UltimateGuitar etc. Or just google any song you're looking for.

Kudos to RaymondMusic on Fiverr who completed these perfect transcriptions.

And here are a couple of great videos of these songs: