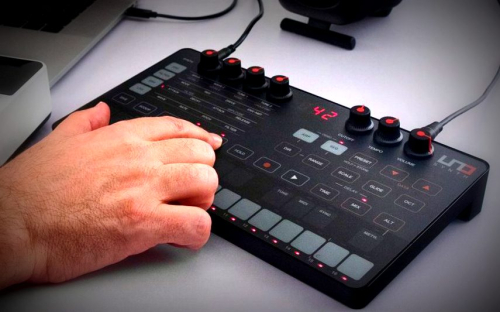 IK Multimedia is an Italian music tech company that has long had a reputation for creating "cheap and cheerful" interfaces (iRig 2, AXE I/O), MIDI controllers (iRig Keys) as well as a boatload of software for recording and effects like Amplitube, Syntronik and SampleTank. Last year at SuperBooth, IK Multimedia stepped into the ring with its first hardware synth, the Uno. This year, they've followed up with their first drum machine, the Uno Drum, coming in June.

With a street price of $200, the Uno Synth is a remarkable device. It's cheap enough to almost be an impulse purchase as a first hardware synth but unique enough to provide something new to experienced musos. Of course, selling a synth for $200 requires cutting some corners and those design decisions may be deal-breakers for some buyers. Luckily, the company pulled in synth designer and musical genius Erik Norlander to guide them on the development of the Uno Synth. Despite its compact size, it's easy to use and has a beefy sound.

I watched a lot of videos and read a lot of reviews of the Uno Synth as well as other low-cost synths, and this one best fit my newbie priorities: easy-to-use and low price.  It's also worth noting that IK Multimedia occasionally runs promotions with bundled software, so that's another way to get more value.

For me the key advantages are: it's easy to get started (just plug in headphones and batteries or USB power), it has 100 built-in preset sounds, it's got nobs that make it easy to adjust the wave type (square, triangle, sawtooth etc.), filter, cutoff, tempo and volume, it's got a cool built-in arpeggiator and sequencer, and a built-in 2-octave (sort-of) keyboard. And the sound is awesome! It's monophonic, so you can't create chords and pad sounds are hard to come by. But it's great for bass, leads and arpeggios. Note also there's no pitch or mod wheel. You can add some scoop and dive to notes, but in practice it's pretty limited. The tremolo and vibrato buttons work ok, but you're not going to shape the sound beyond a limited range with those.

The Uno is quite small in size, like a tall hardcover book and weighs less than a pound. You can throw it in a laptop bag and take it with you without feeling loaded down. Personally I love the design. It reminds me of a modern adaptation of the classic Sinclair ZX81 computer from the '80s. The keyboard is going to be love/hate for some people (it's like typing on a tablet) but it actually works. Of course, you can also control it from a MIDI controller, whether from IK Multimedia or a third party, though it's obviously not as portable when you do that.

The Uno Synth comes with the necessary USB, Midi and Lightning (iOS) cables so it's easy to connect with other equipment. (Though to connect to a Mac or PC you'll need an audio interface also.) There's also a recently updated and totally free synth editor app for Mac/Windows/iOS which gives you a few more controls and makes it easy to load or save libraries of preset sounds and sequences. One thing I would love if there were more tutorials on using the Uno Synth with GarageBand or Logic Pro and how to create interesting sounds and sequences. I suspect a lot of buyers of the Uno Synth are going to be new to this type of music creation. If you're on the fence, give it a shot, there's plenty of fun to be had and the sound is great. 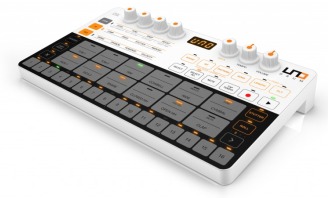 The newly announced Uno Drum has the identical dimensions and similar layout as the Uno Synth, though it's all white compared to the all-black synth. In some ways it's an even more stylish looking device, contrasting with the recent trend in black and grey portable synths. Of course, the layout is different since it has a dozen velocity-sensitive pads for drums (hi-hat, kick, toms, snare, rim, cymbal,  ride, cowbell, etc.) as well as a few different buttons and settings. But between the Uno Synth and Drum, if you know one, you can probably figure out the other without even cracking the manual. You can daisy-chain the Uno synth and Uno Drum together which is kind of cool.

I don't know much about drum machines, but the Uno Drum includes analog sampled drums (from SampleTank) as well as synthesized PCM drum sounds. There are 100 built-in drum kits, 100 patterns and a 64 step (!) sequencer, which is much better than the Uno Synth's 16 steps.  Not to mention that you can chain sequences together into songs, a feature that is missing on the Uno Synth, though you can sort of simulate it by overwriting presets. There are also built-in controls for adding swing, dynamics, stutter and randomization to give a more human feel. As with the Uno, it's both USB and battery-powered, with headphone audio, midi in/out, cables etc. No news yet on a software editor, though it seems likely.

The Uno Drum is available for pre-order for $250 with free shipping.

It'll be interesting to see where IK Multimedia takes the Uno line in the coming years. Personally, I'm hoping for a Duo polyphonic synth / groovebox that lets you lay down multiple tracks, maybe something like Tomm Buzzetta's proposed synth designs for his "Rhythm Section" groovebox and "Grab on the go" workstation. There are a lot of synths out there, but no one is optimizing for ease-of-use and fun like IK Multimedia.

Here's a good overview video of the Uno synth from the used gear marketplace Reverb.