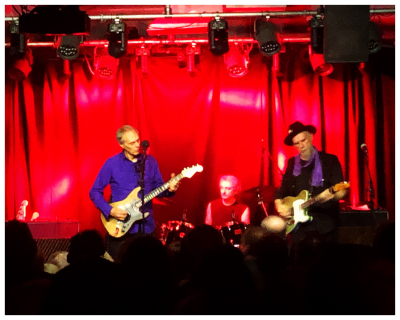 I managed to see one of my all-time favorite bands last night, Television, live at El Club in Detroit. It's not a venue I've been to before and despite a few ominous comments on Yelp, it's a fine club in a fine neighborhood. I had no problem finding street parking, partly because I was ridiculously early. At any rate, the staff are nice and there's an outdoor patio as well as the bar indoors. El Club doesn't have much in the way of seating, just two booths way at the back, but since I didn't want to be standing on my feet wedged up at the front of the stage for three hours, that's what I opted for.

You can get a beer at El Club for $5, a very thin slice of pizza for $3 and shots for not a lot more. Although the beer selection isn't massive, it's better than a lot of clubs, and they had a fair number of Michigan craft beers. The opening act was some guy with shades, a beard, a Strat and some weird-ass sound effects. I don't know if he was putting it through a synth or running a synth on the side but it was less than exciting. I don't mind experimental electronic music, but I had to leave the room after a while. It was just painful. Television didn't come on until 9:30, after an hour of melodic bells. Detroit audiences being what they are started shouting "No more bells!"

I've seen Television twice before in 2014 and 2016 and they don't vary the setlist too much. The band opened with a somewhat spacey intro and then dove into "1880 Or So." When I saw Television in 2014, I was right up at the front of the stage and I was blown away, noting especially how strong Tom Verlaine's vocals were. Alas, in the five years since, they're not quite as smooth. The vocals are way down in the mix which may or may not be a good thing.

They played quite a few songs from their landmark 1977 album "Marquee Moon" ("Venus," "Friction," "Elevation...") , as well as the somewhat obscure and in my mind overrated single "Little Johnny Jewel."  I would have rather heard "Call Mr. Lee" which someone had shouted. But Television concerts are so rare, I'm not gonna complain. I'd listen to them play the phonebook. The largely instrumental jam song Persia was a highlight as was the title track "Marquee Moon."

Television is one of those bands that still gives me goosebumps 40 years later. If you ever get the chance, go see them. There are a few more gigs next week in Toronto, Cleveland and Chicago.

Nice review. While I'm not too familiar with Television's music -I thought the review and comments on the club were interesting -giving more flavor to the experience than a straight-on "Music Reviewer's" review might have been. I'm amazed you got the footage -groups can be a little restrictive on that. Guess that's why it was taken from that distance!