Guy Pratt - My Bass & Other Animals 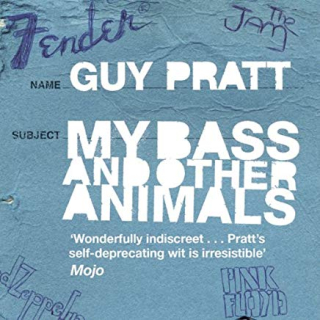 Although I was not familiar with Guy Pratt, I certainly knew many of the bands he played with: Roxy Music, Robert Palmer, David Bowie, Madonna, Michael Jackson, Robbie Robertson and Pink Floyd to name a few. His book "My Bass and Other Animals" though poorly titled, is a terrific account of what it's like to play sideman to the legends of the music industry. It's like sitting down at a pub with an old friend from high school thirty years later  and discovering he toured with one of the biggest bands in history and he lets you in on all the crazy shenanigans.

This book’s genesis is from a series of life/stand up performances that Pratt did telling his stories of life as a rock and roll Road dog. That said, as a conventional autobiography it starts a bit slow as you learn about Pratt’s upbringing, first bass, first band etc. As Pratt's career takes off, the store is become quite funny. There were times when I was in stitches due to the materials as well as Pratt’s wonderfully dry English delivery. The stories about Pink Floyd are hilarious. If you listen to the audio version you also get Pratt's very entertaining American regional English accents. Here's a video of Guy Pratt talking about smashing his bass on stage at the end of  his tour with Pink Floyd.

For bass heads or other musicians, the last chapter includes a full rundown of just about every bass, guitar, amp, and effects pedal that Pratt has owned. This is a great book and an awful lot of fun. But if you are bothered by stories of drug taking or drink, probably best to skip it.

And just for posterity's sake, here's a twenty-six year-old fresh-faced Guy Pratt playing bass on "Money" from the 1988 Delicate Sound of Thunder tour, live album and DVD. However, brace yourself for those dreaded late-eighties fashions.