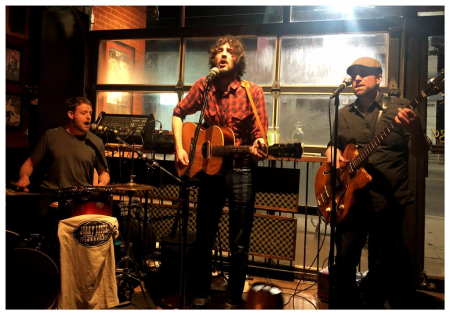 I had the good fortune of seeing Jerry Leger & The Situation live in Toronto recently. They have a strong local following for their regular gig at Castro's Lounge in the Beaches area of town. While guitarist and pedal steel player James McKie was not in attendance, the band plays well as a trio and it was  an excellent show.

The band pulled heavily from Leger's most recent double album "Nonsense & Heartache," which I highly recommend. The album was produced by Cowboy Junkies guitarist Michael Timmins. In a single album Leger manages to cram a lifetime of film noir vignettes with titles such as "Forged Check," "Coat on the Rack," "Hired Gun," "Baby's Got a Rare Gun," and "She's The Best Writer You've Never Heard Of." the album is pulling from a wide range of influences including '50s rock and roll, R&B, Blues and Rockabilly sounding like a mix of "Highway 61 Revisited," "Watching The Detectives," and "Baby Did a Bad Bad Thing."

Leger has been playing with the Situation for ten years and in an earlier era, they would have earned a gold record and sold-out shoes across America. As it stands, they will be embarking on a month-long tour of Europe starting this week with dates in Germany, Sweden, Norway, UK and Ireland. In May they'll be touring Canada. Hopefully momentum for this album will build and they'll undertake a tour of the US in the fall.

I managed to shoot a couple of videos which you can view below. If you have the chance to see them on tour, I highly recommend it. And tell 'em Zack said hi.

And for comparison, here's the official video for "Big Smoke Blues," which was also shot at Castro's Lounge and around Toronto.

What a performance!!! I love it. Jerry Leger you are rocks!!!