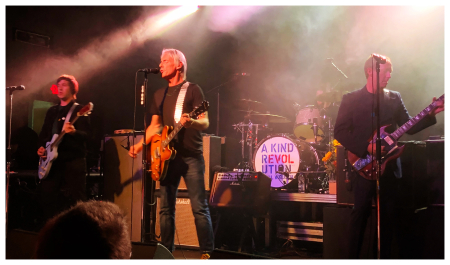 I'm a bit behind in my posts, so I'll keep this one short. Paul Weller did a US tour, following his fall European tour, and I managed to see him live in Detroit at St Andrew's Hall. I'd seen Weller some years earlier at the Warfield in San Francisco and that was a good show.

More than 10 years later, the Modfather is rocking harder than ever. His voice was in great shape, the band was tight and they also played a much broader range of songs including hits from The Jam, The Style Council and his early solo work. I never thought I'd get to hear "My Ever Changing Moods" live and it was incredible. Songs

Guitar player and longtime sidekick Steve Craddock from Ocean Color Scene was in absolutely stellar form.  They also played songs from the two most recent albums "A Kind Revolution" and the awesome "Saturns Patterns." Because it was Detroit, he finished off with a nice Motown set including the old Jam standby "Heat Wave."

It was a great show and I captured a couple of songs on video.