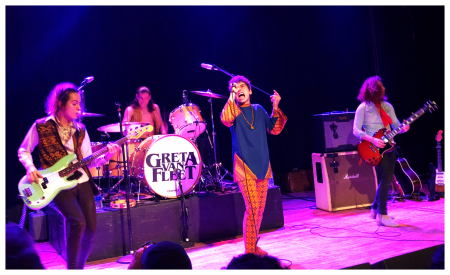 I was able to see quite a few good shows this past year, including Paul Weller, Paul Kelly, Wishbone Ash, Jethro Tull and more. But the best gig by far was a December show by Greta Van Fleet. Although they're a Michigan band, I wasn't able to get tickets to their sold-out Detroit shows. Instead, my wife managed to get $10 tickets (!) in Kansas and we turned it into a weekend road trip.

For those who don't know, Greta Van Fleet are classic rock's latest up-and-coming superstars. This is a young band, ranging from 18-21 years in age. Oh, and three of them are brothers. It's hard to believe, but these young kids rock as hard as Led Zep ever did. In fact the first time my wife heard their hit single "Highway Tune" last summer, she thought it was some long-lost Zeppelin song that had never been released. They've only released 8 songs so far, and the songs on their initial EP are definitely in the Page/Plant school of classic rock. It will be interesting to see how they expand their range and repertoire as they release more material.

And while they are young musicians, they have incredible chops. The band may not always have the greatest stage presence --singer Josh Kiszka is tentative on occasion -- but they are one of the tightest bands I have ever heard. They sound like they've been playing together night after night for years on end. Which is exactly what they have been doing.

If you get a chance to see them live, I highly recommend it. Looks like their next tour takes them through Europe in the spring.

Here's a short video from the concert as well as the official video for Highway Tune.

Good Stuff, thanks for the information.

Especially, I Liked What You Said About Guitar In Article.

Very nice!! Feel free to check out my guitar blog at guitarpixx.weebly.com