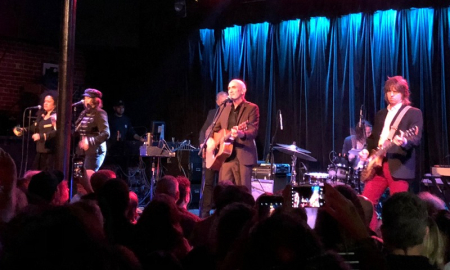 Paul Kelly has been one of my favorite musicians since a trip a few years back to Australia. A buddy set me up with an iPhone full of Australian music and Paul Kelly's "Songs from the South" greatest hits album ended up in heavy rotation. In the fall, I saw that he had released a new album "Life is Fine" which was shooting up the charts, and embarking on a tour of North America. Even better, my other Australian mate Rob got tickets to see him at Slim's in San Francisco.

Although Kelly only went on stage at 10pm (a late night for an old fart like me!) it was a corker of a shoe. Slim's is a modest size club (capacity of about 500) and they were mostly full, which is pretty good for a weeknight. I'm pretty sure I was the only non-Australian there and everyone seemed to have had about 4 more beers than I did. So it was a lively and exuberant audience. With five decades of touring and recording, Paul Kelly is a national treasure in Australia; he's written songs that are uniquely Australian with world-wide appeal.

Kelly has quite a bit of acoustic and bluegrass music in his background, but I was glad that this was more of a rock and roll show with a full band. He played the new album "Life is Fine" in its entirety and then went into a greatest hits set with two encores. The new album is good, though I was not familiar with it. I recognized just about every song after that including classics like "From St Kilda to King's Cross," "To Her Door," "Before Too Long," "How to Make Gravy," and "Darling It Hurts."  The show ran two hours and it was one of the best shows of the year.

Here's a video of a song "Firewood & Candles" from the new album.