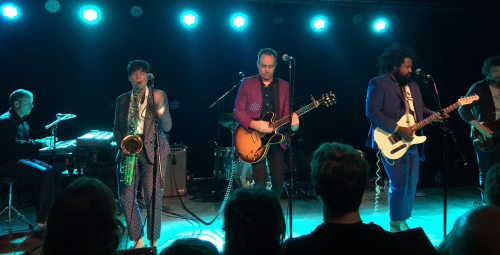 Ted Leo & The Pharmacists, one of my favorite bands in the last twenty years, is on tour promoting their first new album in seven years. Although the album "The Hanged Man" was mostly composed and performed by Ted Leo as a solo project, this is a full band tour. I managed to see them at Detroit's Magic Stick club and it was a great show.

There were two local opening acts Someone Who Isn't Me (SWIM) and the delightfully energetic punk pop band Ryan Allen and his Extra Arms. Ryan and crew did a great job with 110db of high energy rock loaded with hooks. Ryan's a fan of Ted Leo from way back and the band certainly held their own with this audience. 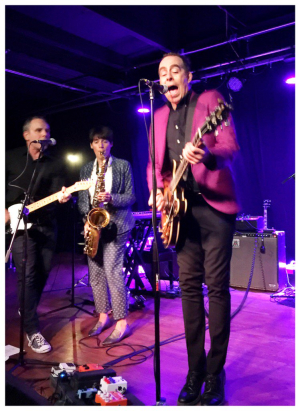 Ted Leo went on stage about 9:40pm. Although there was no separate encore, it was a two hour show which was not bad for a Wednesday night. The band was incredibly tight with Leo's trademark distorted punk guitar, a powerful rhythm section with the full force of drummer Chris Wilson, Adrienne Berry on sax and backing vocals, and at times three (!) guitar players resulting in a wonderfully frenetic and soulful sound. There were only minor order changes in the setlist from shows in Toronto, Boston, DC in the last week. The tour is drawing heavily from the new album, which is quite solid.

Leo was garrulous about his descent into piano and acoustic guitar singer-songwriter form, but the songs don't need any apologies. Highlights included the upbeat R&B influenced "Can't Go Back," "Run to the City," "Lonsdale Avenue" and "Let's Stay On The Moon." There's still plenty of fast-paced songs, but Leo is painting from a wider palette than previously with a couple of more relaxed songs, rich in vocal harmonies. But when the band got to the more rocking numbers, they were full-on explosive and moving in a chaotic choreography. Despite Ted's protestations that his voice was rough, he sang beautifully.

The band also played a good assortment of songs from earlier albums including "Where Have All The Rude Boys Gone?," "Parallel or Together," "The High Party," and my favorite song "Biomusicology."  I think we can all agree "Biomusicology" is one of the greatest songs ever written. Heck it could be a Lennon / McCartney / Strummer / Weller composition, for all I can tell. That song just sends a chill down my spine. And although I was hoping to hear "Timorous Me" in an encore, the rest of the material was so good and the banter so enjoyable I can't fault Leo for skipping a couple of songs.

I managed to shoot video of several of these songs. I think the audio captured and processed on my iPhone is possibly better than it sounded at the club. I always find the mix at MagicStick to suffer from too much bass and drum and not enough vocals.

The band is on it's way to Chicago and touring coast-to-coast through December. If you haven't seen Ted Leo live before, this is a tour worth catching.