If you grew up in the '70s Jethro Tull was a band that was hard not to notice. They had a slew of FM radio hits and a distinct flute-driven sound ranging from blues to hard rock to prog to folk. Whether you loved Tull or hated it, it was immediately recognizable. Ian Anderson, was the songwriter, vocalist, flautist and arranger that defined Jethro Tull. Iconoclast that he was, he cycled through more than two dozen band mates over five decades, dispensing with the second longest-running member of Tull, guitarist Martin Barre, back in 2011. 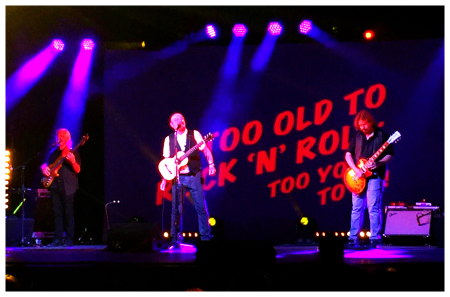 I managed to see the latest incarnation of Jethro Tull (or more accurately, "Jethro Tull by Ian Anderson") at Interlochen this week. Although I'm not a huge Tull fan, I'm familiar with their '70s hits. There is a certain sameness to a few of the songs ("Locomotive Breath," "Cross-Eyed Mary," "Hymn 43" all sound the same to me) but there's an inventiveness in the standout songs like "Thick as Brick," "A New Day Yesterday," "Living in the Past," and their jazzy interpretation of Bach's "Bourrée." And of course, what can be said of "Aqualung" --a song that has arguably one of the greatest guitar solos of all time. (Guitarist Martin Barre claims it was recorded in a single take, fearing that if he dallied, Anderson would put another flute solo in its place.) 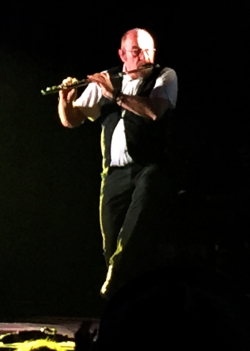 The band played a lot of the classic songs drawing heavily from the late '60s and early 70s, along with a few more recent songs and instrumentals.  And while the band was incredibly tight (they play virtually the same set list every night on this tour), the concert was a bit of a mixed bag. The flute playing, the guitar, the keyboards, the drum solo were all excellent, but...

I knew that Anderson's vocals had deteriorated in the '80s, due to a heavy touring schedule that inflicted permanent damage. Anderson's range has become more limited and his voice has lost the rich, smooth sound that characterized his best work. While not awful, it was clear as the night wore on, he's not doing the songs justice.

And this is not intended as a knock on Anderson. He is a bona fide musical genius having released 30 albums, won awards by the score and invented an entire genre. Heck he can still play the flute on one foot. And at 71, there would be no shame in sharing the singing duties with another performer.

During Aqualung, the last song before the encore, there was a video with a second vocalist, Ryan O'Donnell, who toured with the band a few years earlier, singing some of the verses. Similarly, on Heavy Horses, he had video of singer and violinist Unnur Birna from Iceland performing some parts. Personally, I think it would be great to have a second vocalist singing along with Anderson, or alternating songs or verses or lines. However, pulling up a video with a vocal backing track seems a bit cheesy to me. Still the band was great and guitar player Florian Opahle put his own mark on Martin Barre's original solo.

Jethro Tull is coming upon it's 50th anniversary in 2018, which is pretty crazy if you think about it. If you haven't seen Tull before, or if you want to relive some of those memories, check out their latest tour with dates in the US, UK and Europe coming up. Sadly, it seems unlikely Ian Anderson will be able to sing as well as he used to, and unless he brings back Ryan O'Donnell, the vocals are going to be pretty weak.

Here's a video of the encore, the classic Aqualung. Skip ahead to 3:10 if you want to get to the awesome solo.