The Accidentals at Fountain Point Resort 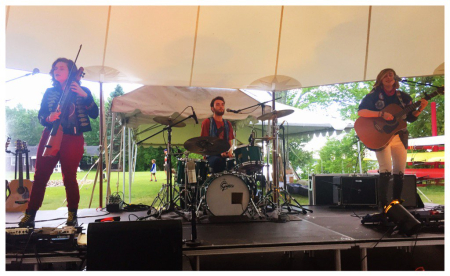 The Summer concert season has kicked off in Northern Michigan with a concert by The Accidentals at Fountain Point Resort, just outside Traverse City. The Accidentals just wrapped up a 40 city tour and are preparing for the launch of their new album on Sony Music Masterworks in August.

The Accidentals are a bit of a local legend in Traverse City, forming the band while in high school and entering into the Interlochen Center For the Arts first-ever singer-songwriter program. Based on their success, they chose to skip college and have been touring and recording ever since. As a result, they've got massive music chops playing a dozen instruments between them and they have wonderful vocal harmonies offset by violin, cello, electric guitar and bass.

Although The Accidentals mostly play original and fairly eclectic Folk /Jazz / Roots music, they also occasional throw in a rock cover or two. Here's a video from an earlier concert covering "Taxman" and Rush's "Tom Sawyer" showing them for the music geeks that they are.

Fountain Point Resort has more than a dozen concerts planned through the rest of the summer on Thursday and Sunday evenings including The Crane Wives, The Go Rounds, Jazz North and more. Tickets are $10-20 with an outdoor bring-your-own lawnchair setting. There are food trucks, but you can also bring your own food and alcohol. You can also buy a season pass for $95.