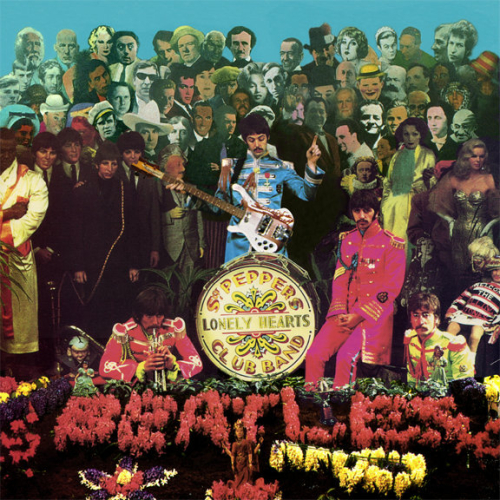 It was 50 years ago today, the Beatles' album "Sgt Pepper's Lonely Hearts Club Band" was released, ushering in a new sound for the Beatles, but also for rock music in general. For many, Sgt Pepper's is considered a breakthrough album, for others, including some of the Beatles themselves, an over-blown affair. Not to miss an anniversary, Apple has released a newly remastered version of the album, undertaken by none other than Giles Martin, son of the Beatles' original producer George Martin. Fans of the album will want to pick up this new version, regardless of what this or any other review says.

The reissue is available in several forms, but in this review I'll cover the "Deluxe" 2 CD edition which includes the remastered original album along with a second disk of 18 never-before released alternate takes as well as remastered versions of the singles "Strawberry Fields Forever" and "Penny Lane" that were recorded earlier in 1967, but weren't on the original album. There's also a "Super Deluxe" version which includes 2 disks of alternate takes, the original mono mix, the 1992 25-year documentary film on DVD, a blu-ray audio disk and a 144 page hardcover book with details on all the recorded tracks, photos, hand-written lyrics etc.

Beyond the 50th anniversary, the impetus for the reissue is that the original stereo mixes of Beatles albums are rather outdated. Back in '67, few people owned stereos. So while the Beatles were heavily involved in the mono mixes, none cared enough about the stereo mixes to actually be involved, instead delegating the task to the Abbey Road audio engineer Geoff Emerick. Because of the limitations 4-track recording, many of the original stereo mixes are panned quite hard left and right. While that extreme panning (for example hearing the drums widely separated from vocals) can be dramatic on occasion, the new reissue sounds much better. Not only does it sound more modern, it is much more vibrant. 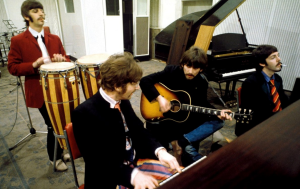 There's a richness to the new release that makes the drums, bass and occasional guitar fills crisper and more natural sounding, without sacrificing anything. While the improvement is most pronounced when listening on headphones, even with a decent car or home stereo, the original stereo album sounds flat by comparison. There's a punch to the new mixes that is unmistakable.

The sound is most noticeable on the opening title track and "Reprise," "Lucy In The Sky With Diamonds," "Getting Better," "Fixing A Hole," "Lovely Rita," "Good Morning," and "A Day In The Life." Admittedly, that's pretty much the entire album. To be clear, every track sounds much better.

As with most "alternate takes" disks, I would have to say this one is also a bit of a mixed bag. Almost by definition, alternate takes are those which were not chosen for the original album, usually being obviously inferior. Still, they provide an interesting perspective. The Beatles are at times funny, sharp, flat, off-key, out-of-time, but always sounding good. It makes the Beatles more human and less like pop geniuses to hear the takes before they've been subject to the magic of George Martin's production wizardry. The remastered versions of "Strawberry Fields Forever" and "Penny Lane" are superb, but only a few of the alternate takes will be worth more than a few listens. The unadorned version of "Good Morning" is excellent and I found take 1 of "A Day In The Life," arguably the Beatles' greatest song, fascinating. If you're a fan of the Anthology albums, you'll love the disk. If you're a casual fan, it's less compelling.

At this point, I may as well state the obvious: I'm a huge fan of this album and the reissue. I don't think "Sgt Pepper's" is necessarily the Beatle's best album -- I would rate "Revolver" higher-- but it holds a special place for me as the first album I bought. And it still sounds fresh, innovative and compelling, 50 years after it's release.

The only down side to listening to the remastered version, is that not only does the original sound flat in comparison, but so do the rest of the Beatles' albums. I can only hope that Apple remasters the rest in the coming years. And for fans who just can't get enough, check out the PBS show "Sgt Pepper's Musical Revolution" as well as Rolling Stone's excellent coverage including the back story on every song.