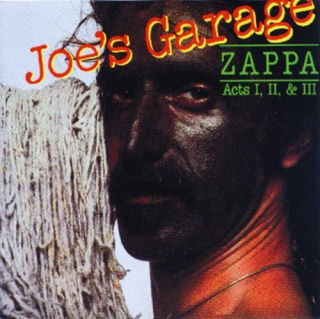 For a lot of people, Joe’s Garage remains one of the most approachable of Frank Zappa’s works. Technically, a triple album when released on vinyl in 1979, it's long since been reissued as a double CD combining Acts I, II and III and clocking in at just under 2 hours.

Although the title track has the usual Zappa key and tempo changes, it has a catchy sing-along chorus and just the right amount of humor to not overwhelm the casual listener.

Zappa narrates the story as the “Central Scrutinizer,” providing the necessary explanations that keep the story moving along as Joe moves from Garage Band to degenerate rock star, a criminal and ultimately gives up on his musical dreams to worker at the Utility Muffin Research Kitchen Facility. It’s got the usual rock opera themes of dystopian society, music is illegal, yada yada yada. (In tribute to Zappa, we snuck in a few references to "Louie, Louie" in Underground Radio.

The lyrics range from profane (“Crew Slut”) to comical (“Why Does It Hurt When I pee?”) and occasionally profound:

Considering the album was released in 1979 against the backdrop of government censorship of rock music, it’s an appropriate and compelling social satire.

The album has several epic guitar solos and an occasional ‘70s disco-funk influence, but overall the album holds up. The penultimate song is the instrumental “Watermelon in Easter Hay” a signature Zappa song, that his son Dweezil regards as one of his father’s greatest solos. It’s a truly majestic piece of work, intended as the product of Joe’s tortured imagination. Here's a video of Dweezil Zappa playing it:

You can also find more rock opera reviews at www.rock-opera.com