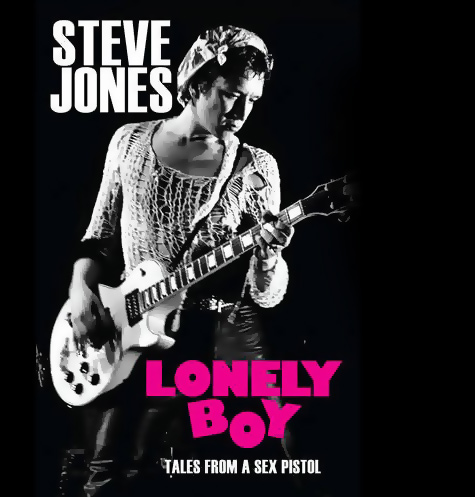 Steve Jones of the Sex Pistols recently published his long-awaited autobiography "Lonely Boy."  I've read lots of rock bios over the years, and this is certainly the funniest, but also the starkest. Jones pulls no punches as he tells of his rough upbringing: the father who left his mother, tales of sexual abuse, shoplifting, you name it.  Jones' isn't after your sympathy, but it does explain his errant ways as rock and roll guitar hero. There's plenty of sex and drugs added to the rock and roll, but you're unlikely to envy Jones' addictions.

It's a fitting tale that sheds light on the dawn of Punk rock from someone who helped make it all happen.  Jones describes how his theft of musical equipment from some of his favorite rock stars (including David Bowie) led to the formation of the band that became the Sex Pistols. He also describes the band's early gigs, the role of manager Malcom McClaren on the band and some of the rock bands he loved. Who knew Jones loved bands like Boston and Journey in addition to The Faces and Mott the Hoople.

Jones takes the high road when talking about his bandmates and gives songwriter and vocalist his Johnny Rotten full credit for taking the band in a unique direction. But his description of life on reunion circuit with the Sex Pistols in the early 2000s makes it hard to imagine putting up with Rotten's behavior.

I listened to the audiobook version and I found it riveting. It feels like you ran into a long-lost high-school buddy in a dive bar and he told you how he spent the last twenty years of his life in an epic rock and roll roller coaster.  It's a helluva ride, but maybe better to hear about it than to live.

I also highly recommend Jones' daily rock and roll radio show Jonesy's Jukebox on KLOS and also available via Podcast.  I'm not sure why the podcast still doesn't include music, but it's still worth listening to.

Awesome post !! I read your article first time its informative.

Wow all these years Johnny Rotten is the most popular in the sex pistols and glad to know that Steve Jones finally speak about his piece. This is a good read!