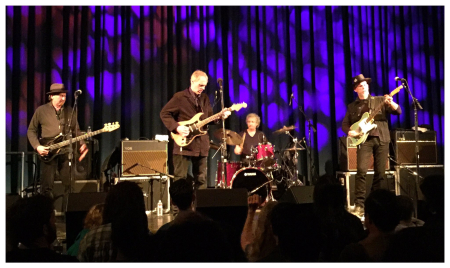 In 2014, I managed to see the legendary band Televsion live in Toronto --something I never thought would happen. This is one of my all-time favorite bands since 1977's Marquee Moon. Alas, they broke up after their second album, reformed briefly in the early '90s and faded out of existence. Nonetheless, they reformed one more time in the 2000s and seeing them live in Toronto was one of the best concerts of my life.

It's hard to top that kind of experience. I'm not even sure it's prudent to try. But when Television announced they would be playing in Santa Cruz (as well as two gigs in San Francisco) how could I not go?  This tour was promoted (was it promoted?) as being built around rare tracks and instrumentals. Phew. That meant I could go and enjoy it without having any outsized expectations. After all, not every experiment succeeds.  But it is in that experimentation, that trial by-fire ordeal, that high-wire performance without a net, we can find greatness. Sometimes.

So how was it?

The band was tight. Particularly on songs off their debut album "Marquee Moon", one of the most influential albums of all time. Having three fourths original band members doesn't hurt. Jimmy Rip who took over from the talented but, ah, eccentric, guitarist Richard Lloyd may now have more gigs under his belt than his predecessor. That said, everyone is a couple years older, and Tom Verlaine's vocals, which were never that strong, are not getting any better with time. And as much as I enjoyed the more obscure songs ("Persia," "The Sea") and various instrumental wanderings, I didn't find them as compelling as some of the more, ah, normal, songs. When I hear a song like "Venus," "Elevation," or "1880 or So" it sends shivers down my spine.

To be clear, I would pay to see Television play "In-A-Gadda-Da-Vida" if that's what they wanted to play. I mean, as long as they played a couple of cuts off "Marquee Moon."

Anyways, check out the videos below.  Apologies that the last song is slightly out of focus.

For fans who managed to see Television in 2016, let me know your thoughts by posting a comment below.