It might have been a slow Sunday evening for some folks, but I managed to score great seats to Elvis Costello & The Imposters playing at the historic Michigan Theater in Ann Arbor. I've seen Elvis about half a dozen times over the years and this was by far the best show of them all. While the tour purported to focus on his 1982 somewhat-overlooked album "Imperial Bedroom" the band played at least as many songs from earlier albums. Which is good, because "Imperial Bedroom" is overlooked for a reason -- it's not as good as the material that came before it!  Ok this is just my opinion, but I'm the guy writing the review, so bear with me. 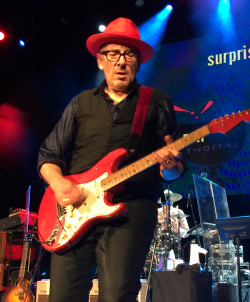 At any rate, he kicked things off with "Lipstick Vogue" from "This Year's Model" and played a good mix of songs from the late '70s and early '80s including "Accidents Will Happen", "Tears Before Bedtime", "Shabby Doll," "Man Out of Time," "Beyond Belief," "Green Shirt," "Kid About It,"  "You Little Fool" and an epic version of "Watching the Detectives."

They took a short break and came back with "Alison" with just Elvis and his two soulful backup singers Kitten Kuroi and YahZarah, with a style straight out of Stax. He also did a nice version of "Shot With His Own Gun" and "Almost Blue" accompanied only by Steve Nieve on piano. Costello was never the strongest of vocalists for this type of work, but he (mostly) managed to pull it off. 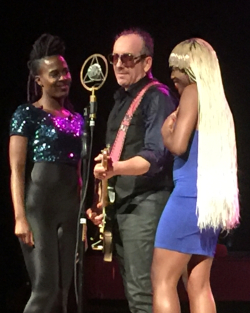 And for whatever smooth edges Elvis lacks vocally, he's more than willing to make up for it in guitar. In fact, I'd say he played more out-there crazy guitar in this concert than I've ever heard him play before. It gave the whole evening a tremendous energy boost.

The encore was a fantastic set including "Every Day I Write The Book," "Pump It Up" and "What's So Funny About Peace Love & Understanding."

Costello rocked the house for nearly 2 1/2 hours over 27 songs. For a guy who's pushing 62, he showed that he can still bring it on every night. And in retrospect, I still don't love "Imperial Bedroom" but I will admit that "Almost Blue", "Man Out Of Time" and "Beyond Belief" are among Costello's best songs.

Overall, it was a great concert and it appears that he's playing a slightly different mix of songs every night on this tour. If you get the chance to see him, I highly recommend it.

I managed to shoot a couple of videos from the concert including "Lipstick Vogue", "Accidents Will Happen" and "Watching the Detectives."