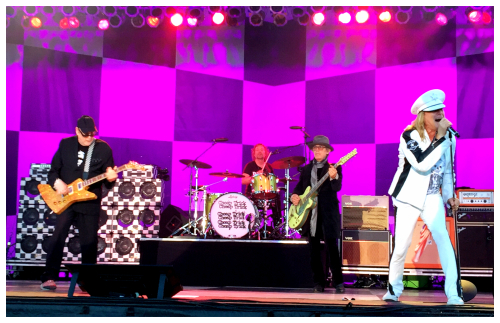 Following out this week's concert extravaganza, the third gig in 7 days was Cheap Trick. I've seen Cheap Trick before and despite the legal drama with original drummer Bun E. Carlos, they are still a great live band. Following Cheap Trick's inclusion into the Rock and Roll Hall of Fame and the release of a great new album "Bang Zoom Crazy Hello" Cheap Trick is currently touring with Joan Jett and Heart. But if that wasn't enough to keep them busy, they are also doing one-off gigs on their own, which is what brought them to Traverse City for the Cherry Festival.

With a career that spans 5 decades, 17 studio albums and numerous hit singles, the band has a pretty big catalog to draw from. They also tend to mix things up a bit in different shows, so it's not always the same songs every night, which is nice.  They started off strong with their usual show opener "Hello There," followed by "Just Got Back," "California Man," "On Top Of The World," "Baby Loves to Rock," and "Taxman, Mr Thief," an obvious Beatles reference from their first album and "Never Had a Lot to Lose" and "The House is a Rocking" from Dream Police. The band played with a ton of energy. Robin Zander's vocals are in fine form and he still looks good in skinny leather pants and a cape. Rick Nielsen is all over the stage, swapping out a new guitar for every song, flinging picks into the audience and goofing around as always. The rhythm section is extremely solid with Tom Petersson on bass and Dax, Rick's son, on drums, pounding like hurricane. 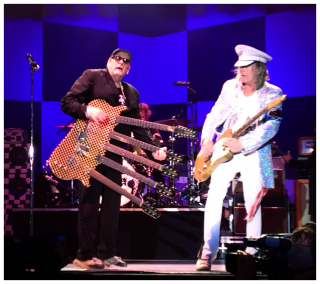 Then they played a couple of songs from their new album "Bang Zoom Crazy Hello:" "The In Crowd," and "No Direction Home." Personally, I think it's a great album, possibly the best since the '70s era and I wish they'd played a few more cuts. Next up was "The Ballad of TV Violence" followed by what was a great solo by Tom Petersson on his unique 12-string Gretsch bass (!) that went into a cover of The Velvet Underground's "Waiting for My Man" with Petersson on vocals. This was followed by the ballad "The Flame" and then the big hits: "I Want You To Want Me," "Dream Police" and an encore of "Surrender." That song still gives me goose bumps.

Rick Nielsen then brought out his crazy 50 pound 5 neck Hamer guitar for a short "Goodnight." The whole set was about 90 minutes leaving everyone thirsty for just a few more songs.

Here are a couple of videos I shot. I'll also try to post some high-def photos later on.

The opening band was the born-and-bred in Traverse City Kenny Olson. It was a a bit too generic-hard-rock-guitar for my taste, but they did manage to get the audience on their feet and Kenny is a great blues guitar player.

I am jealous, Cheap Trick is one of those bands I love but still haven't gotten to see live yet. I really need to fix that! I did get out to see a Kings of Chaos show last year where Robin sang a lot of the songs, and he sounded awesome!

Also heard a few times now that the new album is really good - I will definitely be giving it a full listen.

Cheap Trick is really cool! Thanks for the share. Unfortunately we don't have such cool bands here in SG!