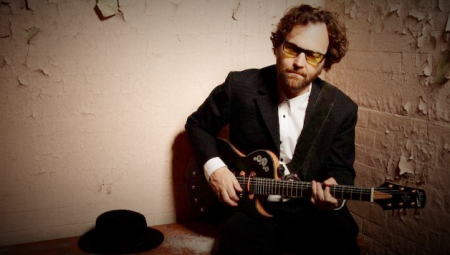 I was able to corner indie musician Mike Marlin between sets at Wilbert's in Cleveland in order to find more about his musical career, opening for The Stranglers and how he writes songs.  He's a much more upbeat and friendly guy than his foreboding lyrics and baritone voice might lead you to believe...

Q. Tell me about this tour. Is this the first time you're in the US?

We're doing the mixed-bag American tour. We're doing some support gigs for big bands, we're stopping at some roadhouses along the way for a random experiences. And I would say this is a random Cleveland experience, in a good way. Great place, good vibes. Then we're doing a really cool venue in New York. A full-on Marlin experience. That's the whole point of coming to America on tour.

I played in Chicago a few years back, supporting The Stranglers. I was supposed to do the whole tour. But the visas did not come through. Unbelievable. The whole things was a car crash. Even the Stranglers had problems. That's actually how the trio was formed. My bass player and drummer couldn't get visas. So only the keyboard player, guitarist and myself were able to travel. So we did two rehearsals, got on a plane, came to Chicago and played support for The Stranglers. We walked into a giant, sold out venue. I thought to myself "We're supporting The Stranglers as a trio, no bass no drums. This isn't going to work." But it did.

Q. How did you update the songs to work as a trio? 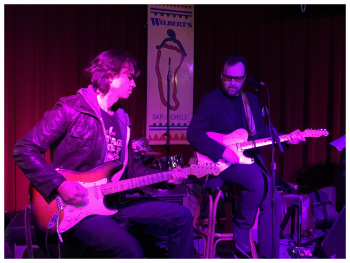 Well, the interesting thing for me is if you take the bass and drums out, you have a lot more space to play with. So instead of going folky we've filled that space. Paul is on keys, Kim is on guitar. Kim's got an amazing way of working with guitar pedals. He's definitely a guitar vibes guy! The first set we played tonight, we kept to conventional guitar sounds. But a lot of stuff we play you wouldn't even know it's guitar. My guitar always sounds like a guitar, but Kim's goes off into another place. So it's more like having a synth player. And then Paul is also an amazing musician. He's also a great sax player.

Q. What was it like opening for The Stranglers?

It's great. I saw The Stranglers as a kid at the Hope and Anchor in 1977 with twelve other people. And then twenty-five years later, I'm supporting them. If anyone had said this was going to happen, I would have said it's impossible. The second thing I love about The Stranglers is that they are serious musicians. They're not just a punk band that did a few things. They've made seventeen albums. Secretly, they're actually a jazz band. No really.

They're like the Doors, a jazz band who happened to have a poet as a lead singer. What I mean is, they're deeply serious about the music they do. Trust me.

Q. How did you connect with The Stranglers?

It was one of these bizarre things. From the age of 22 to 48 I had no ambitions to be a musician. But I wrote songs. I made my first record because I had sold my technology business. I was writing a novel. And randomly I made a record. While I was in the recording studio, absolutely finding my feet, like a 48 year-old kid who had no idea what I was doing. I made a cover of "Staying alive" by the BeeGees. And it was so weird that it got played on the radio. And quite a well-known agent heard it. And he got in contact with me. I sent him the album and he loved it. And he rang up and said "Do you need an agent?" Next thing I know, he got me this great gig supporting The Stranglers.

At that point I had no band. I had never sung a song for another human being, ever. I'd played in bands when I was younger, but I stood in the back and played bass. So it was an amazing thing. Really, a chance in a million. That does not happen! So I nearly said no.

Q. How could you say no to The Stranglers?

Exactly! But, I was really scared. So I put a band together. I was very lucky. I had about three months to rehearse. The first gig was at the Hammersmith Apollo, sold out. Before that gig, I went out and supported Bruce Foxton's "From The Jam" as sort of a tryout. I was absolutely terrified.

Then I went on The Stranglers tour, walked out on stage, in Hammersmith at a sold-out venue where I'd been to see everybody from The Police to The Undertones to Siouxie and the Banshees back in the day. And I thought "what am I doing here?"

But I think, for whatever reason, it resonated with The Stranglers fans. So I ended up doing four tours with them. I hold the record incidentally. I played ninety gigs. And it could go up!

They're lovely people. Very committed to what they do, in a good way. So, that was the start of it. That was a complete left turn in my life. I thought, "well hold on a minute. I'm not just going to make one album. I've got to make another one." Now I've made four.

Q. What were your musical influences?

Originally, I was deeply unfashionable as a kid. I was massively into American music. The trouble was a lot of these bands became uncool. I was hugely into Bruce Springsteen, Graham Parsons, Neil Young, the first three Eagles albums. I stood completely separate from my peers.

Musically, I was somewhere on the west coast of the US, but living in the suburbs of London. Which is why coming to America for me is so musically significant. Because those are my roots. I was a massive Tom Petty fan. Also a big U2 fan.

Q. Lets switch gears. Tell me about how you write your songs

This is going to sound unlikely, but songs come to me pretty much complete. When I say complete, I mean there's a verse, a chorus, and I'll record stuff on my iPhone. It may come as a turn of phrase. Perhaps a riff over a change of chords. It'll be a little thing. And as soon as I hear it, pretty quickly I'll have most of the song.

In my view, what makes a song great is not trying to make everything great, but it's about knowing what is great. Take a song like "Grand Reveal." It's all about the first two lines in the chorus. And as soon as I had those two lines, I had a hundred percent confidence I had a song. "I'm older than I look, I'm younger than I feel." At that point, i think I've got something. And after that it's just finding the thing that makes that hook. For me, a song turns on a lyric, a phrase and the way it drops.

That song was about how I've always wanted to feel. When you're older and more mature, you're supposed to know which way is up. But you don't. No matter how old you are, no matter how much you've seen and where you've been, when you walk into a room full of strangers, it's still like the first day of school. Every day of your life is like the first day of high school. So get over it.

I always write on guitar. Very occasionally on the piano. But you don't want to hear my piano playing. The guitar is my instrument of choice. In my mind's ear, I can always hear the arrangement, the strings or other parts. "The Secret of My Success" is a fully orchestrated record with intricate musical interludes, which I absolutely love creating.

What I love about records is making them. Then I love playing them. But once it's made I don't refer to my own records. What I bring on stage is the songs, not the record, if that makes sense. What's interesting about the MeloManiacs is it's just the three of us. And the record is impossible to play with only three people. But because of how the songs were written, they are just as true with that lineup as with the full orchestrated band on the record. 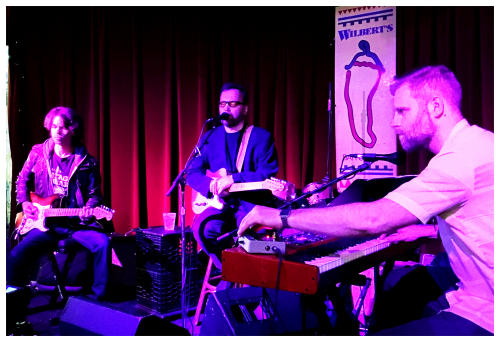 For me it's all about the songs, and the experience of communicating the songs to people I've never met. So much of life is, certainly in the technology world, is about connection. So the songs are an incredibly powerful way of expressing one's self and seeing if it resonates. I don't think anything else can do that in the same way as music. If you write a book you're not there when the person reads it. When you write code for a computer program, the better it is, the less the person using it thinks about the person who created it.

When I open for the Stranglers there are thousands of people there. And there may be two hundred people for whom my music resonates. As a songwriter you can create something where there was nothing. I write songs and play them for other people because I need to. And I'm amazed when anyone else connects. That's what I love.

Check out Mike Marlin's latest album The Secret of My Success and watch for updates on additional tour dates later this year. If you missed the US tour, I've got some videos posted from the Cleveland gig.