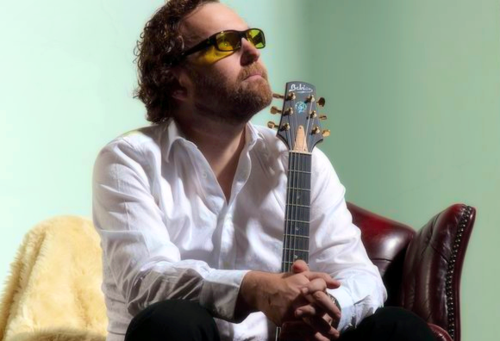 Indie rocker Mike Marlin is on tour with his band the MeloManiacs hitting the midwest and eastern US for a couple of weeks to promote the new album "The Secret of My Success."  They'll be in Chicago, Wisconsin, Cleveland, New York, DC, Cambridge and Connecticut. Definitely worth catching live if they're in your area. Last time Mike and crew were slated to tour the US was with the Stranglers in 2013, and sadly they weren't able to make the gigs happen.

The new album is an excellent, if sombre, follow up to the 2012 release "Grand Reveal." There are a lot of interesting influences and comparisons here with Bowie, Leonard Cohen, Nick Drake, U2 and various and sundry '70s classic rock.

I managed to catch the band in Cleveland earlier this week at a club called Wilbert's. Despite the rather drunken crowd of baseball fans, it was an excellent gig. The first set was basically a sound check before the game. The second set, after the game, was excellent including songs from the new album, as well as older songs "Grand Reveal," "The Magician" and an impromptu version of The Beatles' "Come Together."  The MeloManiacs are playing as a trio with Mike Marlin on rhythm guitar, Kim Murray playing fantastic lead guitar and Paul Silver rounding things out on keyboards and backing vocals.  This a great trio and it gives the songs a more laid back vibe. Still, I would have loved to have had the full band with drums and bass tackling songs like "Skull Beneath the Skin" or "The Murderer."  Hopefully there will be another tour in the future.

I shot some video which I've posted below and will follow up with a Q&A interview with the man himself next week.