Ever Get The Feeling You've Been Cheated? 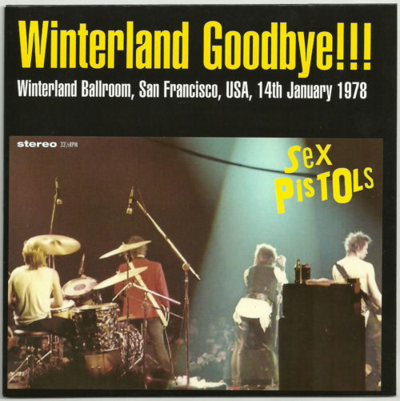 With those memorable words, Johnny Rotten ended the final Sex Pistols concert at Winterland Ballroom in San Francisco in January 1978. Rotten parted company with the band, though they released a few other singles without him as well as the miserable Julian Temple film "The Great Rock 'n' Roll Swindle."

Although most reports from this era say they weren't playing very well, concert footage from Winterland and bootleg albums, tell a different story.  Yes, there are times when the band appears to just want to get things over with --particularly on "No Fun," the Stooges song that served as an encore. The vocals are rough, Steve Jones guitar is occasionally out of tune and Sid's bass playing is not always excellent. But it's still much better than I had expected.

It also seems that in San Francisco, the band found a receptive audience. The show was recorded for local San Jose radio station KSAN and so bootlegs are available if you know where to look.  The sound check bootleg is particularly good.