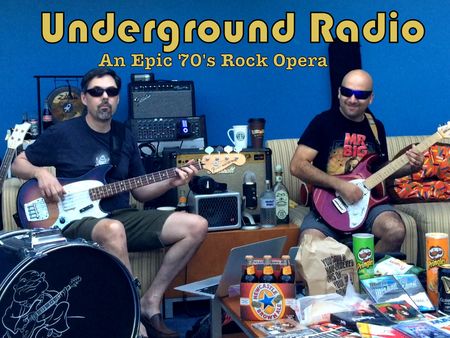 My buddy Rob and I are almost finished with our epic '70s homage rock opera Underground Radio. It's been nearly two years in the making. It includes 20 original songs, 4 vocalists, a slew of vintage amp simulations, guitar effects, hammond b3 organ, handclaps, cowbells, backwards guitars and more.

Underground Radio is inspired by music of The Pretty Things, The Beatles, The Rolling Stones, The Kinks, The Clash, The Jam, The Stranglers, Television, Pink Floyd and others. It's set in a dystopian future under an evil surveillance government, 50 years of winter, rock music is illegal. But these two guys try to jam the government's systems with rock and roll, yada yada yada.

All of the songs will be published under a Creative Commons license so they can be used royalty free by anyone in their own creative projects, like films, games, you name it.  If anyone wants to re-mix the songs, we're happy to share the GarageBand or LogicPro files.

The project is now fully funded on Kickstarter but if we can raise more money towards defraying the mixing and mastering costs, that is appreciated. We're looking for input about what else we should provide backers in return for hitting our "stretch goals".  For example, we could provide more bonus instrumental tracks, chord charts to the songs, higher quality loss-less audio files, a digital tour booklet,  tour poster, album covers etc. Let us know your input in comments or on the kickstarter page.

Update: The music and Libretto are now available for free download at www.rock-opera.com. You can also listen at SoundCloud.

How awesome are the space noises from mars, I've been using them as intros to songs with my band Hybrid Nightmares and our 'the Ages' project.

It still amazes me how they get the sounds recorded.

Great stuff guys. Next project: a collaborative effort in conjunction with Pete Townsend AND Nasa. Pete provides the rudder for creative direction, Nasa provides the funding :)