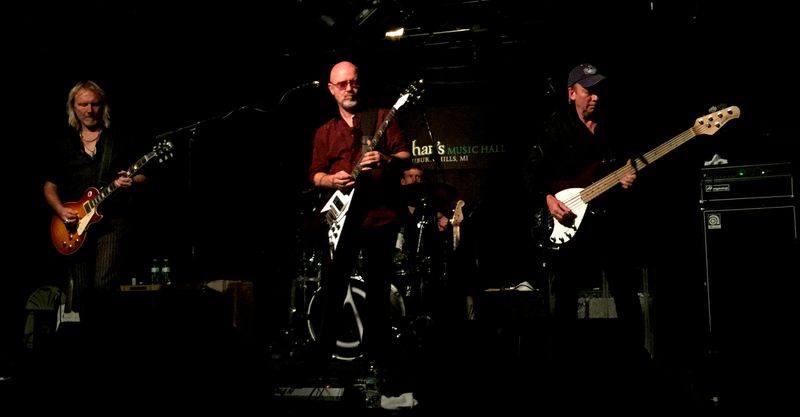 I managed to catch legendary '70s UK rock band Wishbone Ash at Callahan's, a small cub outside Detroit. While Wishbone Ash never had the radio airplay of UK bands like Led Zeppelin or Mott the Hoople, they were every bit as influential. The band was formed in 1969 and put out some of the most rocking, forward looking albums ever. The created a unique meld of English folk, UK blues, and proto-prog rock. But most especially they were famous for inventing the twin lead guitar sound, influencing such bands as Thin Lizzie, Iron Maiden, Judas Priest and Def Leppard to name a few.

This was one of the best live gigs I've ever seen. This is a phenomenally tight band, owing to the fact that the current lineup has been recording and touring together for about 10 years under the leadership of founding guitar player and vocalist Andy Powell.

."  And unlike a lot of long-running bands the newest material worked great and was just as strong as the classics.  Powell's vocals, as well as the harmonies from bass player Bob Skeat and guitarist Muddy Manninem were superb. Given the small venue, it was a rare opportunity to see a legendary band up close. I was particularly taken with the impressive bass work on what looked like a very heavy duty six-string bass.

Here's some video from the gig, including my favorite song "Time Was." (Yes, I was the guy shouting for them to play it and I'm glad I did since it wasn't on the set list.) I have a few more videos that I'll try to add in the coming days.

If you're not familiar with Wishbone Ash, I encourage you to check out their compilation album "Time Was Collection

" or the latest release "Blue Horizon

While this was my first visit to Callahan's, it won't be my last. It's a great venue and looks to have a steady lineup of national touring blues and rock bands.