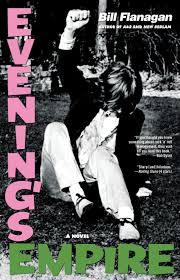 There are not that many great rock books and even fewer good rock novels. But one I read recently ranks as one of the best comic novels I've ever read. From the first page to the last, I was in stitches. "Evening's Empire" by former MTV exec Bill Flanagan is an absolute bang-0n send-up of the trials and tribulations of a fictional '70s rock band called the Ravons, but it could just as well be about the The Faces, The Kinks, The Pretty Things, Wishbone Ash or a dozen other English bands. The book conveys an insider's perspective of the wackiness of the music industry: egocentric rock stars, weirdo bass players, crazy fans, corrupt managers, gurus, money, drugs, fame, feuds and reunions... it's all in there. Flanagan spares no one. But the story is told with genuine affection and love of the music and the business behind it.

What elevates "Evening's Empire" beyond entertainment to a level of comic masterpiece is the picture he paints of the characters. You witness the evolution, for good and for bad, of the industry and it's players over several decades. There's a touch of Shakespearian tragedy in all of this: the price of fame is steep and it costs the characters plenty. And even when it's tragic, it's often funny as hell.

Flanagan acknowledges he's used insider information coming directly from musicians he's worked with. My only criticism is that there are a few subplots in the book that don't really pay off and he probably could have trimmed 100 pages from the book. On the other hand, when I finished the book, I had tears in my eyes and I wanted nothing more than for the story to continue. For those who care about music, this is one of the funniest and most touching books ever.  It is arguably the best rock and roll novel ever written.