We're coming into the final days on two very cool electronic instruments on Kickstarter.  They're sort of electronic guitars, but sort of something else also. While I have my reservations, based on how fast both got funded, there's clearly interest in innovative musical instruments.

Artiphon Instrument 1 is a general purpose MIDI controller that looks like a super short scale guitar and can be used as a guitar, a keyboard, a drum pad or a violin. While super innovative, I somehow wonder whether it's trying to do too much. Still, if you were traveling and wanted to have just one instrument with you to use for a bunch of recording, this would be the one. If you're interested in this one, jump on it fast as the kickstarter project is wrapping up in less than 48 hours. The Artiphon 1 starts at $349. 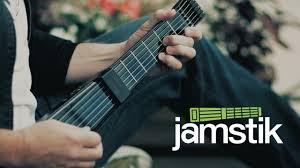 The Zivix JamStik+ is a new updated release of their slightly more conventional MIDI controller guitar. The JamStik+ is a super short-scale guitar with just 5 frets. That's awfully short in my view and holding it looks a bit awkard.  Still, I've been on the search for the "perfect" travel guitar and everything has a compromise of some kind. The JamStick+ optimizes for maximum portability coming in at 16" and 2 1/2 pounds. Heck, it's smaller even than the Palm Guitar, my current fave. And for $229, it's a pretty good price.

Since these are primarily MIDI controllers, neither of these is going to play like a regular full-scale guitar. But plugged into GarageBand, Logic Pro or other Digital Audio software, they can sound like any instrument. Still, I question whether learning guitar on one of these devices will be any easier  than  picking up a cheap made-in-Asia Strat and spending some time in the woodshed. But if you're looking for a low-cost, portable instrument for making music in GarageBand, either of these is worth looking into.