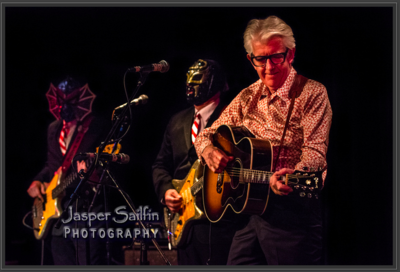 I managed to catch Nick Lowe and his Quality Holiday Review at The Ark in Ann Arbor this week. What a great show! Nick played a short acoustic set and was then joined on stage by the fabulous surf-guitar band Los Straitjackets. While you might find this to be an incongruous mashup, especially given the mexican wrestling masks, it worked perfectly. They added a retro-modern shimmer to the whole show.

Despite my concerns that a "Holiday Revue" would mean a lot of cliché'd christmas songs, the set was a great blend of classic Nick Lowe, more recent works, instrumentals by Los Straitjackets and a few obscure and wry Christmas songs from his recent album "Quality Street

." Highlights for me included "Cruel to be Kind", "What's So Funny 'Bout Peace, Love and Understanding," and a mostly instrumental version of "I Love the Sound of Breaking Glass."  I posted a few videos on YouTube: 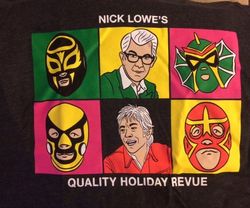 Sadly, Ian MacLagan, keyboard player with legendary band The Faces was supposed to be the opening act, but died just a few days before the tour began. Los Straitjackets played a beautiful instrumental version of "Itchycoo Park" that sent shivers through me.

Kudos to the mythical Jasper Sailfin for his nice photos of the event.  You can view more of his work at Zenfolio.