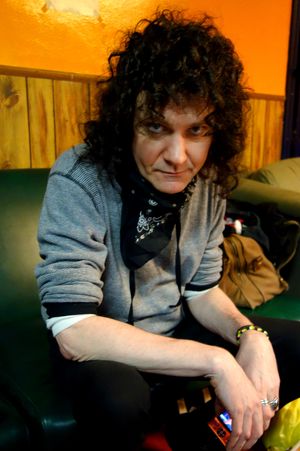 It's been a few months since I saw legendary garage rock band The Cynics in Cleveland and I was reminded that I still had an interview with lead singer and songwriter Michael Kastelic in the can. So apologies for the delay, here's the interview...

Q. When I listen to your back catalog, there's a significant evolution in the sound of The Cynics. What were some of your early influences?

For me personally it's different than for the band. For the band, the influences were the garage 60s stuff on the back from the grave label, like the pebbles. Gregg was always a record collector so he had a lot of '60s stuff that was in his purview all his life. He grew up with that kind of sound a bit more than I did. I was really into Eric Burden and the Animals. Eric Burden was always my favorite singer. 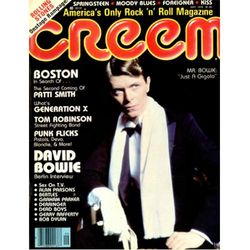 He still sounds really good. I hope he's still crabby. That was my favorite thing about him. He was a hard drinker and known to be kind of a character.

For my personal influences the gateway drug was actually David Bowie. There was something called "The 1984 floor show" on the Midnight Special. That would have been before Diamond Dogs came out. It was 1974, and Diamond Dogs was about the book "1984."  Reading interviews with Bowie turned me onto everything from Marianne Faithful, The Troggs, Roxie Music, The Velvet Underground, The Stooges, Brian Eno. Reading interviews in Creem Magazine ormed a lof of stuff that was influential both in writing lyrics and in my singing.  That doesn't sound like it would go with the garage stuff. But I started singing the garage stuff later, when I joined the band with Gregg in the '80s.

Q. How did you and Gregg meet?

I was in a band that actually did sound like the influences I  mentioned, more of a Roxy Music / David Bowie kind of band. And Gregg had a PA and was doing sound for us. He was getting The Cynics together then. At first they had a different singer. I went to see them play and I said "Wow you're band's really good except I don't think your singer's very good." And he said "I agree. Why don't you do it?"  So that's how it started.

Q. How much of an influence was the '70s punk new wave movement on you?

We were both total punkers. We listend to everything from the early Ramones onward. Gregg was really into Fear and the more west coast stuff. I was more into the New York stuff like Richard Hell, Patti Smith and Television. And that's probably the reason the Cynics came about. People don't realize punk was pretty much dead by 1977. It was over. Then it started becoming pappy new wave, sing-songy dance music, club music. So what were we gonna do? We weren't gonna do that. And punk seems to be kind of a dead issue. There's only so much you can do with it, it seemed to us. So we just started doing this sort of, for lack of a better word, "'60s garage revival." We still called it punk rock. It was just more influenced by the '60s stuff than the punk stuff.

Q. Did you get to see the Ramones live? 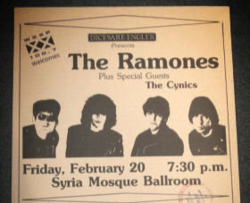 Oh yeah, we opened twice for The Ramones. It was amazing, incredible. There was one thing that really struck me. The road manager Monte Melnick brought in these big Kinko's boxes of setlists. All the same. They just toured perpetually. They always needed them so why not print them off in bulk? They played the same set for the whole tour. For Joey's he'd write the city, like say, "Cleveland" so Joey could say "Hello, Cleveland, we're The Ramones." They didn't know where they were half the time.

You could tell Joey had some OCD going on. One show we were playing with them, Joey didn't want to go on stage because he couldn't find his gloves. He was crying to Monte "I can't go on, I can't find my gloves." But they were really sweet.

Q. Lets talk about a couple of specific songs. Tell me about the song "Spinning Wheel Motel."

That's kind of a real story. There's an actual hotel in Jersey City. I was there with a friend and we were watching this strange going on. I guess it was some kind of prostitution / drug deal. A guy knocked on a door, a guy opened the door, a girl went in. She was in there for a little while and then we heard a bunch of screaming. And then the door opens and another guy comes to the door and shot two people. And that was the Spinning Wheel Motel, the inspiration for the title! And kind of the feeling of it too. It's also a little bit about Barbara, she was the girl who could run a little bit faster. Because she moved here from Spain and married Gregg and kind of took over the record company Get Hip and started running it.

There's a lot of different meanings to my songs. They usually don't mean just one thing. I try to make them universal archetypes. So they mean a lot of stuff to a lot of people. Those were always my kind of songs, the songs I liked. I don't really like it when a songwriter tells you what the song is about, it's about my dead grandmother. Because then everytime you listen to the song you're thinking about his dead grandmother. And no matter what it meant to you, it's kind of negated. So I don't like to say a song is about one thing. I try to make them primal Jungian archetypes. So they're about feelings all people experience and they can understand the song funneled through their own experiences. Those are the kind of songs it makes me happy to listen to. 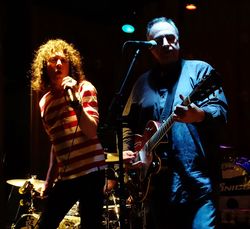 Q. How do you write? Do you write the lyrics first or the melodies?

There's a lot of different ways. Lately Gregg has been coming up with these beautiful guitar melodies and I let them roll around in my brain for a while. Then I look in my notebooks for ideas or verses. I'll page through them and see if something fits. Or I'll just listen to it over and over again and see what images it brings to mind and start writing things down and just take it from there. It's mainly a process of re-writing and paraphrasing. Once I get a theme and a feeling I'll write things around that.

Q. Some of the songs have psychadelic feel to them, like "Beyond the Calico Wall / STP." How did that come about?

We did lots of acid back in the day. In fact the night Gregg asked me to sing for the band we were tripping balls. Maybe that's why I said yes. Damn what happened? That was some bad acid! (laughs) I'm sorry what was the question? I'm seeing streamers. (laughs.)

We took advantage of the producer we had Erik Lindgren from Arf Arf. He was really good at doing backwards tapes and stuff. So we thought since that was his forte, we woud put a bit of that psychadelic stuff on that record. It's fun to do live.

Q. You guys have a huge following in Spain. Why is that?

Q. Any plans for another album?

Yes, Pablo and Angel are here in America with us. We've already written six new songs. We're gonna try to get some more together. The plan is to record during the summer. Either in Spain or maybe with Jim Diamond in Detroit. Working with him was so great. I would like to do that again. It was effortless. He does everything so simple. Just sets up the mic and tells you to play. Pushes record, and doesn't really mess around with it much, which I like.

And here's some video from the Cleveland gig: