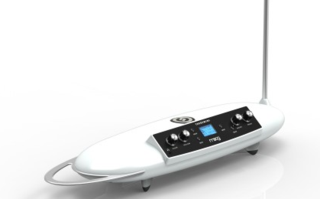 The Moog Theremini, originally announced at Winter NAMM 2014, is now shipping.  The Theremini is an updated digital version of the traditional analog theremin.  This is more of  a "Theremin for mortals" that looks like a '90s Bose hi-fi clock radio that's been squashed.  It takes the basic concept of a hand-gesture controlled instrument and makes it a whole lot easier to work with.  You still control the Theremini by moving your hands in front of two antennae, one for volume and one for pitch.  But you can also now turn on "assistive pitch quantization" to make it easier to play notes in tune.

For example, if you select C major scale, and turn the pitch control all the way up, you would only get notes from within that scale, similar to using GarageBand's smart piano control.  If you turn the pitch control all the way off, then it works and sounds like a traditional theremin.  (Ok, purists will argue that because it's using the Animoog synth engine to generate the sounds, it's not the same as a traditional theremin.  But I think most people won't care.)

Theremins are notoriously difficult to play in pitch because, like a fretless bass or a violin, you can play any tone and it's up to you to figure out how to hold your hand to get right on the note and not be a little (or a lot) sharp or flat.  A fretless bass usually has markers to show where the frets would be, but with a theremin there's nothing to guide you but thousands of hours of practice.  With the Theremini you can select how much pitch quantization is used, thus allowing some degree of vibrato.  Like any instrument, it will still take a lot of practice and patience to learn to play the Theremini properly.

The Theremini has a bank of Animoog synthesizer sounds to choose from, giving it broader sonic palette.  There's a realtime chromatic tuner and LCD display to show the current note and accuracy.  And there are built-in delay settings to get a spacier sound.  It includes a built-in speaker suitable for solo practice, a headphone jack, separate left and right audio output and a USB / Midi port.  The Theremini looks like the perfect instrument for your next sci-fi space rock opera.

This looks like a really fun instrument. Thanks to it being electric now you could actually do a ton of really awesome and interesting things with this it. I want one so badly :D