I never thought I would get to see Television live.  But this weekend, after an 8 hour journey to Toronto, it finally happened.  More than thirty-five years after first listening to their debut album "Marquee Moon", more than thirty-years after they had disbanded (for the first time), I saw the magic of Television live on stage.  This was an amazing concert. 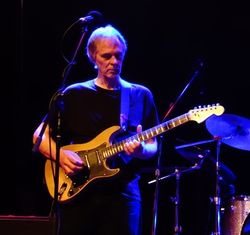 For readers unfamiliar with Television, this was a band that was formed in 1973 by Tom Verlaine and Richard Lloyd.  They became the house band at New York's CBGB's and helped pave the way for punk and new wave bands including the likes of The Ramones, Blondie, The Talking Heads and others.

Television disbanded in 1978 shortly after their second album.  They reunited briefly for a third album and tour in 1992, but otherwise Television ended up a lot like the Velvet Underground: a band that never sold a lot of albums but profoundly influenced the evolution of rock.

While Television would occasionally get lumped into the New York punk scene, their music was distinctly avant-garde compared to their peers, owing more to improvisational jazz than to three chord punk rock.  They developed a unique sound largely due to Verlaine's unconventional guitar playing style coupled with intertwining solos by the, ah, mercurial Richard Lloyd.   Not surprisingly, Television's musicianship has led them to be widely regarded as a "musician's band" influencing dozens of bands in the last thirty years ranging from U2, Joy Division, REM, Red Hot Chili Peppers and others.

I was quite surprised when Television reformed in 2013 and playing occasional gigs and festivals.  Could this band really live up to my expectations?  Would Verlaine still be able to pull of songs from so many years ago?  Would Jimmy Rip, who has played with Verlaine for many years, be able to fill in for Lloyd? 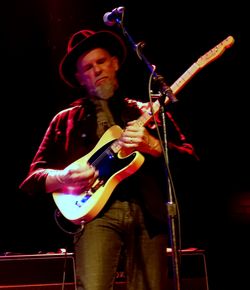 In short, this was an epic show.  It exceeded all expectations; the band was tight as a drum and showed themselves to be virtuousos.  Verlaine's playing was impeccable and his vocals strong.  Billy Ficca's drumming was powerful and full of energy.  Jimmy Rip handled complex guitar parts, interlocking with Verlaine and never breaking a sweat.  His style was wonderful and filled Lloyd's shoes admirably and went above and beyond in newer songs.

The setlist stuck mostly to familiar songs from Marquee Moon ("Prove it", "Elevation", "Venus", "See No Evil", "Guiding Light") along with a few other classics "Little Johnny Jewel", "Glory" and "1880 or So".  You could tell this was an audience that knew these songs inside and out.  I'm glad to say that it was a full house.  And it wasn't just old farts; there were many fans in their twenties who must have discovered Television more recently.  Heck, a lot of them wouldn't have been born when Television first set stage at CBGB's.

I've also posted a few vidoes from the show which you can view on YouTube.  While I don't think the videos fully capture the energy of the band performing live in front of an audience, they  give you a flavor of the show.  Honestly, I don't think you can tell the difference between Television's gigs today and those from their albums "Live At The Old Waldorf

Television will be playing May 12 in Boston with a few additional dates in Europe during the summer.  And for die hard fans, you can find very high quality live recordings of Television's recent concerts at fan sites like DimeADozen.org.