The Cynics Live from Cleveland 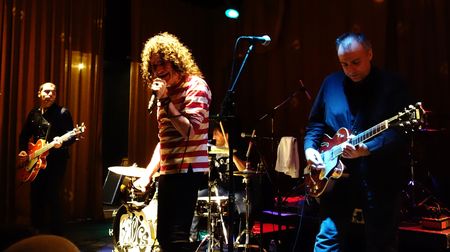 I managed to see legendary garage rock band The Cynics in Cleveland at the Beachland Ballroom.  They were opening for The Sonics a 60's garage rock band that reunited a few years ago.  The Cynics are an incredible band that has been playing for 30 some years.  The sound has evolved through several lineup changes over the years, but at the core of the band are Michael Kastelic as front man and Gregg Kostelich on guitar.  There was some small amount of irony with these two guys with similar Croatian names playing at was once Cleveland's Croatian Liberty Home and Ballroom, but I'll leave that aside.

The Cynics delivered a high energy 60-minute balls-to-the-wall set largely drawng on older material for an audience of long-time fans.  The room was packed and people were singing along with many of the songs.  I would have liked to hear a few slower numbers from the 2010 album "Spinning Wheel Motel" to mix things up a bit, but otherwise there was little to complain about.  Vocals were good if not always loud enough, guitar was excellent and the rhythm section was a driving force.  The drummer looked like he'd had a considerable workout by the end of the evening.

I've posted some photos online and videos on YouTube.  The sound is a bit loud, but still excellent.

The Cynics also have gigs lined up in Austin at SXSW on March 15 and will be touring New Orleans, Atlanta, North Carolina, Virginia and beyond through april.

In the coming weeks, I'll post an interview I did with Michael Kastelic on the history of the band, his musical influences and songwriting.

Update: For some reason I'm not able to embed a PicasaWeb slideshow of photos from the gig. But you can view it here.

I've never heard of this band, but it's interesting to see people supporting a band they've loved for so long. Thanks for sharing.