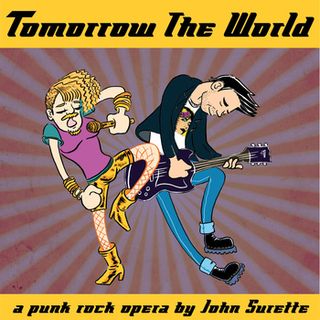 John Surette of '80s Massachusetts punk band "Boy's Life" put together a Punk Rock Opera called "Tomorrow The World."  This is another successful Kickstarter rock opera that I missed out on.  It was performed live in Boston and the music is available for $7 on BandCamp.  The production and sound quality are top-notch and the music has plenty of pop power punk hookage to keep it interesting.  Well worth the price of admission.

I don't know how I missed it, but apparently lots of folks have been developing rock operas over at Kickstarter. One that I am particularly impressed with is Luke Carr's "Storming the Beaches with Logos in Hand."  Luke Carr is out of Santa Fe and it's a sort of Sci-Fi rock opera about an alternate version of North America history where there's an advanced Native American culture, a failed industrial revolution and a war.

It's probably too late to get in on the Kickstarter action, but this looks pretty epic.  Here's one of the videos from a recent live gig.

According to Carr's blog, the album is expected in 2014.  It sounds superb.

The Cynics Meet The Sonics One of my favorite bands, The Cynics, will be playing two shows opening for '60s garage rock legends The Sonics.  They'll be playing Feb 27 in Chicago at the Double Door and Feb 28 in Cleveland at Beachland Ballroom.  While the Sonics are interesting for historical reasons, the Cynics are the band to see.  They are perhaps the best example of the "Children of Nuggets" garage rock revival and after 30 years are still going strong.  Their music has evolved over the years, but it's still got a sharp edge to it.  Sort of a combination of The Byrds + The Beatles + The Ramones.  If you like high-energy, melodic fuzz-guitar driven rock (and honestly, who doesn't?) there are none better.  I've been dying to see The Cynics for years and I'm really looking forward to it.  The Cynics also have gigs lined up in Pittsburgh and Austin at SXSW.

If you're not familiar with The Cynics, check out their 2011 release "Spinning Wheel Motel

." It's an awesome album and a great introduction to this band.  Here are a couple of videos from YouTube: