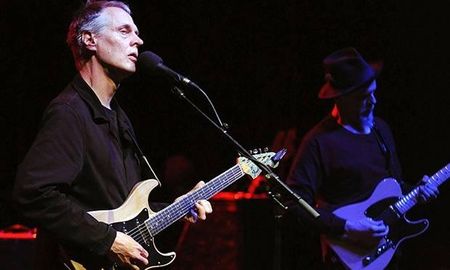 I had one of those "Oh Sh**" moments yesterday.  A friend told me he managed to see Television live on their 2013 tour.  I was happy for him, especially thinking he must have traveled to Australia or the UK to see them.  And then a few seconds later after searching on Google I was heart broken to realize Television had played in San Francisco, my own back yard, just two weeks ago.  And somehow I missed it.  WTF? 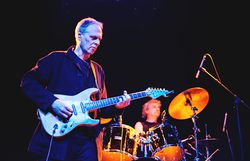 If you're not familiar with Television, let me just be clear before we go any further.  Television is one of the greatest bands ever.  This is not hyperbole, it is simply a fact.  They are also, sadly, somewhat obscure.  They were the first band to play at CBGBs, put out the brilliant debut "Marquee Moon" in 1977, followed up with an almost as good second album the following year and disbanded, seemingly at the height of obscurity.  In the most recent 35 years they toured sporadically.  They toured in support of a third album

Of all the bands I listened to from the punk / new-wave '70s and early 80s, Television is head and shoulders above all the others.  Yes, I love the Clash, The Stranglers (whom I finally saw live this summer), the Jam, the Sex Pistols, The Ramones, Elvis Costello.  Television simply blows them all out of the water.  What made Television unique was the ferocity of two guitars fluidly alternating between intertwined rhythm and lead parts.  Television, like The Velvet Underground, had a relentless, driving sound, but with a greater musicality. And like The Velvet Underground, Television never sold a lot of records, but their impact on future bands was huge. 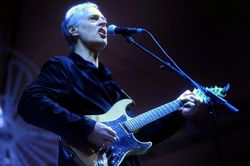 If there is one Television album to buy, it is of course "Marquee Moon"

, their debut.  But there are also two excellent live albums.  "Live At The Old Waldorf

" from San Francisco 1978 was recorded for radio and captures the band at their edgiest.  "Live At The Academy 1992

" features the band on their brief reformation from a concert in New York.  It's polished, even a bit laid back in parts and absolutely wonderful.  Both have excellent sound and are well worth it even for the casual fan.  There are still a few remaining dates on the tour in the UK at the All Tomorrow's Parties festival (11/23, 11/24) and in New York (11/29, 11/30).  Meanwhile, I will be listening to both live albums all weekend and hoping to see the band sometime in 2014.

There are some quite decent videos from the concert in San Francisco on YouTube. Yes, it's a bit shocking to see the band is  35 years older than the mental image I have in my mind.  But the music is tight, the vibe is good and how I wish I had been there. 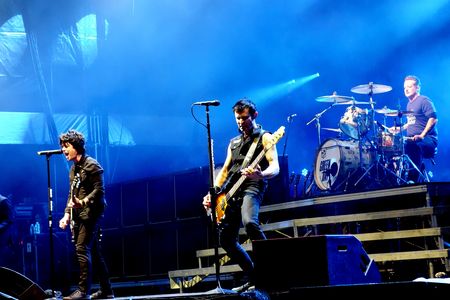 Greenday put on a great show at AT&T Park in conjunction with the Salesforce conference.  Loud, wet, cold and fantastic.  Despite a few glitches in the audio that resulted in a short acoustic interlude, it was a great show.

I've posted some photos at below via Picasaweb.

And here's a video of "Holiday" from YouTube after the soundsystem melted down. 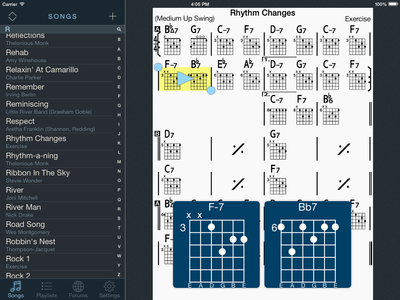 Technimo has updated their awardwinning iRealb musical accompaniment application and re-christened it as iReal Pro.  The new version is available immediately for Mac, iPhone, iPad and Android.  iRealPro remains easy to use but adds several new capabilities including:

AudiBus capability makes it possible to use iReal Pro in conjunction with other music apps on your iPhone or iPad, for example, combining iReal Pro with guitar audio from GarageBand, AmpliTube or AmpKit.

iReal Pro has more than 30 different accompaniment styles to chose from (Rock, Soul, Pop, Ballad, Bossa Nova, Funk Rock, Swing, Latin, Blues, Shuffle etc.) enabling a broad repertoire.  You can customize the accompaniment by changing not only the style, but the tempo, the key and the bass and piano instrumentation.  Also worth noting is there are hundreds of songs available on the forums including the typical Jazz standards, Blues, Beatles, Grateful Dead, Pop, Rock and more.  So even if you're more comfortable playing songs than creating them, there's a ton of material to tap into.  Take a look at the video below to get a feel for iReal Pro on the iPhone.

If I have one criticism of iReal Pro it's that it is very jazz oriented.  So even the rock and blues songs  inevitably sound like a lounge lizard jazz combo who wouldn't know how to rock if they were playing AC/DC.  I'm not sure what the best solution to this is.  Maybe some of the songs are using older styles, or maybe there's a need for more styles and rock instrumentation.  Hopefully this is something that iReal Pro can continue to improve.

Overall, iReal Pro continues to get better and better with every release.  It's a versatile tool for the practicing musician.  iRealPro is just $7.99 for iPad and iPhone via iTunes and $19.99 for the Mac.  Best of all, this is a free upgrade for all existing iRealb users.