Stu Hamm at Guitar Workshop Plus 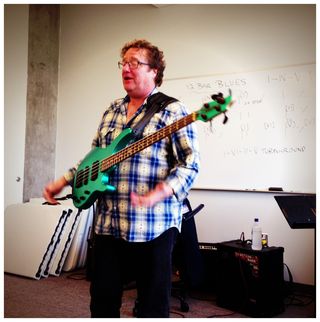 Stu Hamm was another of the guest artists who appeared at Guitar Workshop Plus in BC this summer.  Hamm is a legendary bass player, famous for his own works as well as for playing with some of the greatest guitar players in the world including Joe Satriani, Steve Vai, Frank Gambale, Michael Schenker and others.  He helped create and popularize many new techniques in bass playing that enabled the bass to be more than just an instrument of accompaniment.

It was great to have him come out to Guitar Workshop Plus where he talked about his development as a bass player, played an impressive set (solo and with the workshop faculty) playing original songs as well as fantastic covers of "Lucy in the Sky with Diamonds" and "Going to California" among others.  He also spent several hours with the bass students.