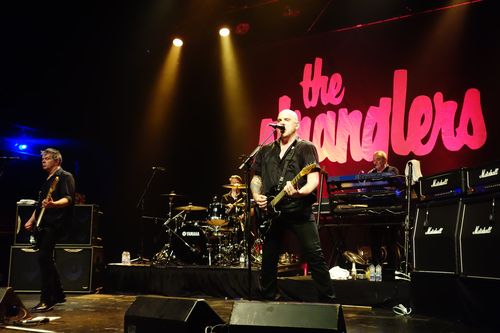 It was a night to remember.  After 35 years, I finally got to see the Stranglers live yesterday in Toronto. Having waited so many years to see the Stranglers live, I'm happy to report that this was one of the best concerts I've ever seen.  They played a ton of old classics ("Toiler on the Sea," "Walk On By,"  "No More Heroes," "Hanging Around," "Golden Brown" as well as newer cuts ("Freedom is Insane," "Mercury Rising.")

Here are some photos shot with my Sony RX100.  I must have caught every smile that crossed JJ Burnel's face that night, because he seemed pretty serious.  And no karate kicks that I could see.  Still, his singing was and bass playing were top notch.

The band played had a really tight sound, vocals were excellent and Dave Greenfield's keyboards were as brilliant as always -- especially his one handed, beer-drinking solo.  Baz is a huge asset to the band and has injected some new energy with his excellent guitar playing and overall showmanship.  Regrettably, Jet Black did not play the gig and it seems unlikely that he will be on the North American tour.  (Though this is admittedly speculation on my part.)

And here are some videos I've posted.

While it was disappointing that Mike Marlin, who was originally scheduled to play the North American tour, could not make it, local band Organ Thieves more than held their own.  I'll post a separate write up on them in the future.  The Stranglers would do well to consider taking them on the road for the rest of the tour.

Great post, I need to get to see them soon since I've been a long time fan since the early days. Although I've only been playing the guitar for about three weeks (wow, chord changes are hard!) but I'd love to get to be able to play "No More Heroes" one day!

No more heroes is not a hugely difficult song, though the changes are a bit fast. Hanging Around is also a nice song to learn and it's not dissimilar. You can use open chords instead of barre chords if you have difficulties on Hanging Around. The chords are:
Verse: Am C G (repeat)
Pre-Chorus: Am G C
Chorus: Dm F C (repeat)
Out-Chorus: Dm C F G
back to verse