I was super excited to learn that The Stranglers, a band I've been listening to since their first album in 1977, will be touring North America this summer.  I'll be seeing them play their tour opener in Detroit on May 30 and then the next night in Toronto.  Additionally, they'll be playing Montreal, New York, Boston, Chicago, Philadelphia and Los Angeles.  Shame they are not playing San Francisco, but still...  This is the first time the band has toured North America in 15 years.  I've waited many, many years for this, as have many fans.  So I'm sure it's going to be awesome.  And it's also a heckuva lot cheaper than seeing the Stones.

While some diehard fans will complain that the band is not as good as it once was, it's still kind of a miracle that The Stranglers exists at all today given all the ups and downs of the music business.  Yes, original lead singer and guitarist Hugh Cornwell will be missed, but he's been gone for ages and Baz has his own style.  The recent material from the band is quite good and I expect that the set list will include a lot of songs from the first few albums.  Here's a nice live version of "No More Heroes" from earlier this year at The Roundhouse, London.  Nice to see that Dave Greenfield can still do his solo one-handed while downing a pint.

I'm also looking forward to seeing Mike Marlin, who will be opening for The Stranglers on this tour.  More on that later on.

If you are near any of these cities and are a fan from ages back, you better get your tickets soon.  Many of the shows are already sold out.

Update: Unfortunately now the Detroit gig has been "postponed" and now Mike Marlin is no longer playing the gigs in Toronto and Montreal.  What the hell?

Mitch Laddie Band at The Borderline 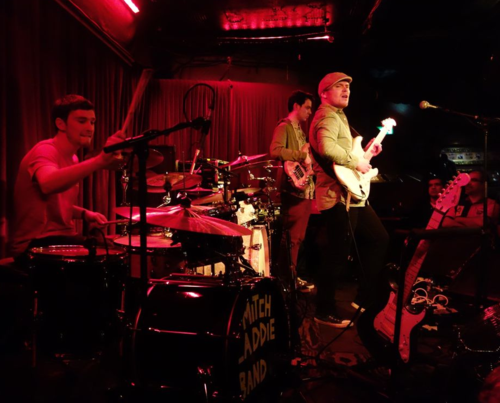 On a recent trip to London, I managed to catch the latest rising blues artist, The Mitch Laddie Band at The Borderline.  I've passed by The Borderline dozens, perhaps hundreds of times, but until recently never managed to see a band there.  The club is located in Soho just off London's famous Denmark Street --the "Tin Pan Alley" of London's music scene.  It's a small basement club with a dark wood bar off to the side and an otherwise open standing area to accomodate a couple hundred people.  The stage is raised, so even if you're at the back, you've got a great view.  The Borderline has been the launching pad of many an upcoming blues or rock band over the last 20 years and this particular Friday night was no exception.

Mitch Laddie Band opened for veteran blues rocker Larry Miller.  To say that Mitch Laddie stole the show might be overstating it, but for a young man of 22 years, he more than held his own.  I'd say a good chunk of the audience was there to see Mitch Laddie and those who weren't will have have become fans by the time the band finished their sixty minute set.  (I'll follow up with a separate write-up on Larry Miller, who was a ball of energy!)

Laddie's got a classic "power trio" with an extremely tight rhythm section made up of Rhian Wilkinson on bass and Matt Connor on drums.  They provide a solid groove to a broad range of music, from slow blues, shuffle, and even some heavier funk-influenced blues.  And as to the man himself, well, it's clear that Mitch Laddie has been schooled by some of the best bluesmen in the business.  He's apprenticed under Walter Trout and you can definitely hear influence from the likes of Stevie Ray Vaughan, Eric Johnson and, of course, Joe Bonamassa.  Like Bonamassa, Laddie's been playing since he was a young kid.  And, like Bonamassa he's got the whole package with guitar, vocals and songwriting skills to boot.

I'm a sucker for slow blues and Mitch Laddie tears into it with a passion that goes far beyond his years.  He's able to tap into that deep, soulful sound that makes the blues so enduring.  He also incorporates a a healthy dose of funk into his repertoire that stands out from the standard 12-bar blues that we all know and love.  Even though it was a short set, the band covered a range of sounds and styles that kept things fresh and left the audience thirsty for more.

I've posted some photos on I've posted on PicasaWeb as well as some HD videos on YouTube.

It's clear to me that Mitch Laddie is following in the footsteps of some great blues players; Laddie may well be the next Joe Bonamassa.  I expect that within a couple of years, Mitch Laddie Band will be touring some of the most famous blues clubs and festivals around the world and headlining in a few more years after that.  Then hopefully, he'll come back and play clubs like The Borderline where things really started to take off.

" and it's available online at Amazon and iTunes as well as directly from the Mitch Laddie site.  Mitch Laddie Band are touring in England through the summer.