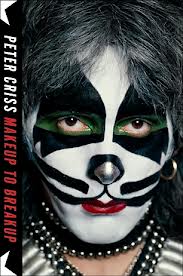 I'll admit it right here: KISS is a guilty pleasure and KISS books, doubly so.  As it turns out 2012 has been a pretty good year for KISS fans: 2 autobiographies, a tour and a new album, Monster

.  This past week, I read the latest of these autobigraphies, Peter Criss' book "Makeup to Breakup - My Life in and out of KISS

While I found Ace Freheley's "No Regrets

" bio to be a disappointment (it should have been called "No Insights") Criss' book is a more compelling read.  Most KISS fans are familiar with the "official" history of the band as told by Gene Simmons and Paul Stanley that positions Ace and Peter as two screwups who couldn't stay clean and sober enough to stay in the band for the long haul.

To Criss' credit, he doesn't deny any of that.  (Neither does Ace.)  What makes Criss' story compelling is the recognition of his own personal weaknesses that land him in trouble.  Repeatedly.  For years.  And years.  Criss' story is a bit of a trainwreck that keeps you reading page after page.  Criss' addiction to coke cost him two marriages, millions of dollars and several lost years.  And while Criss dishes on his former bandmates in ways that are pretty lurid, he's equally candid about his own failings --maybe a bit too candid at times.

But when you understand his schooling by strict Catholic nuns and the amount of verbal abuse and manipulation he took from KISS co-founders Simmons and Stanley, you can start to understand how things went wrong.  Ultimately, Criss' takes responsibility for his actions and appears to have adjusted to a clean and sober lifestyle after the KISS reunions.  He's still a bit too angry at Simmons and Stanley for problems that were largely of his own making, but it's still a fascinating story even for a casual KISS fan.

I found this article very informative and so were the links that you provided. KISS is an amazing band and me and my family love their music. The problem with bands is that it is quite difficult to coordinate a team of musicians to have the same goals for the future and align their lives to be able to achieve these goals for the good of the bans and its supporters. This is why many bands end up breaking up.