iReal b for iPad and Mac 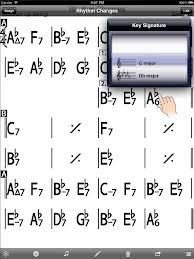 A buddy of mine Robert introduced me to a very cool application with the somewhat awkward name iReal b.  The name's not too important, but what iReal b provides is a fakebook for tons of Jazz, blues and pop songs.  Unlike other fakebooks out there, iReal b lets you add more and more songs including hundreds from the iReal b forums or even create your own.

You can set up the charts for a song by setting the tempo, the chords for the verse & chorus, the breaks etc.  Then iReal b will play the song for you.  You can also easily transpose the song to different keys, slow it down, speed it up, loop sections etc.  This makes it great for practicing songs or sharing arrangements with others in your band.  You can also view different chord inversions and add on different style packs.

iReal b is a relatively young operation and so the application doesn't include all of the capabilities of older applications like Band-in-a-Box.  On the other hand, iReal b is a lot cheaper and it's available for iPad, iPhone and Android as well as the Mac.  I was also pleased to see the iReal b folks add new songs based on requests from customers, including 50 Blues standards with songs by Albert King, BB King, Otis Rush, Muddy Waters,  Howlin' Wolf, John Lee Hooker, Eric Clapton and others.

While the sound of the songs is not perfect (they sound a bit too canned for my taste), they are a good starting point.  iReal b is a good deal at the Mac app store for $19.99 and it's practically a steal for the iPad and iPhone or Android at only $7.99.