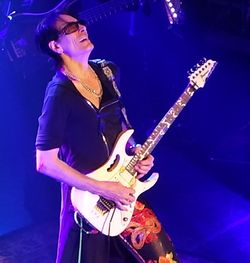 Steve Vai was in San Francisco recently on his latest "Story of Light" tour and my guitar playing buddy Rob and I managed to attend.  Rob made the trip up to Napa also, so he saw them play two nights in the same week.  He's just that much more comitted than I am.

Of course, most people know Steve Vai as one of the modern guitar shredders, routinely on the cover of Guitar World magazine and up there with Joe Satriani, Yngwie Malmsteen et al.  While the music definitely weighs heavily to the prog rock side of guitar virtuosity, there's enough melody and energy to keep the show interesting even to those who are not themselves guitar players.  (Ok, I suspect that's a small part of the audience.  But in practice it means you can bring your girlfriend or wife to the gig and she probably won't hate it.  There's even a couple of melodic slow temp songs like "Tender Surrender" that work as ballads.) 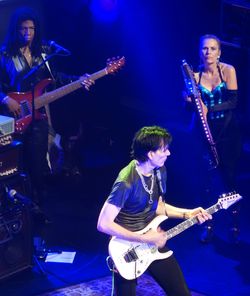 The Regency is a great venue, big enough that it's a show, but small enough you can get a clear view from just about anywhere.  And although Vai is clearly the star of the show, he's got a set of absolute first class musicians in his band.  It's an eclectic mix with drummer Jeremy Colson (who also tours with Billy Idol), guitar player Dave Weiner, bass player Philip Bynoe and Deborah Henson-Conant on electric harp.  I kid you not, it actually works.

Vai's a brilliant guitarist, but he's also an entertainer and he's got a sense of playfulness and humor that comes through loud and clear in his show.  I guess that's what you get for touring with Frank Zappa all those years ago.

Here's some videos I've posted on YouTube.  They're shot in HD on the Sony RX100.  Unfortunately, the sound is occasionally clipped at very high volumes.  Nonetheless, it should give you a flavor for the energy this band puts out.

It was a really great show. I was in Europian tour concert.