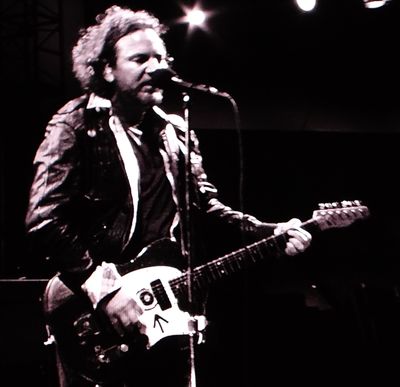 Pearl Jam was in San Francisco and played at Oracle Open World a few weeks back with Kings of Leon as the opening act.  I've seen Pearl Jam before at the Bridge School Benefit playing an acoustic set and this was definitely a lot louder and with a lot more energy.  So for PJ fans, I think it was a good show.  Unfortunately both bands were very loud and the result is that the sound on the videos is pretty lousy.  So I remain somewhat frustrated that my Sony RX100 is worse at audio than my five year old Canon G9.

But for those interested, I've posted some songs on YouTube shot directly from one of the big screens.  Unfortunately, it's all sepia tone and distorted sound. 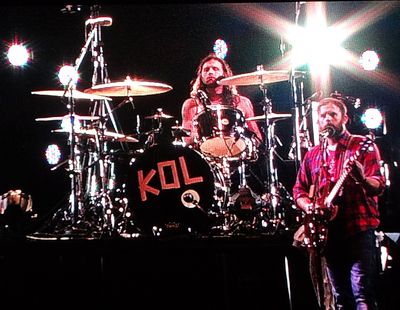 Kings of Leon played recently at the Oracle Open World music extravaganza in San Francisco a few weeks back, opening for Pearl Jam.  While I'm not a huge KoL fan, I thought it would be interesting.  It was certainly loud.  In fact, it was too loud for my Sony RX100 camera, resulting in a lot of distortion.  Heck, I could feel my internal organs vibrating from the bass drum.  And it was kind of cool when Eddie Vedder came out to join them. 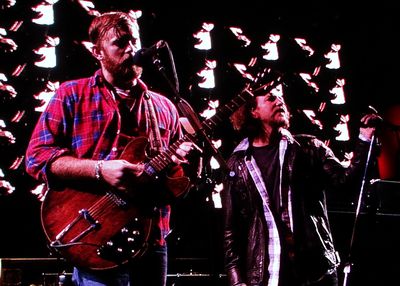 Despite the poor audio quality, I've posted a few songs on YouTube shot directly from one of the big screens for those who want to check it out.  And I'll follow up with the Pearl Jam post shortly.

Dark Star Orchestra at The Fillmore

I've always been a fan of tribute bands.  While it's not quite the same as seeing the real thing, for a lot of acts like Pink Floyd, The Police or The Rolling Stones, it's as close as you're ever going to come to seeing the live in a small club.  So I was pleased to hear that I was finally gonna get my chance to go see Dark Star Orchestra (DSO) in their famous tribute to The Grateful Dead, playing live at The Fillmore in San Francisco.  The Fillmore is legendary in The Grateful Dead canon as one of their de facto club in the early part of their career and featured in their live album "Live/Dead

The basic idea behind DSO is that they pick a particular concert from the 30 year career of The Dead and recreate in its entirety capturing the tone and pace of an on original concert from a bygone era.  Sometimes it's an early '70s show and other times it's a late '80s show and once in a while it's put together from various Dead side projects.  At the end of the evening, DSO announces the setlist. 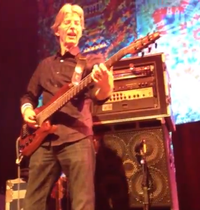 So how good are DSO?  Good enough that DSO's founding guitar player and vocalist John Kadlecik, now plays with Furthur, the latest incarnation of The Grateful Dead led by founding members Bob Weir and Phil Lesh.  They're so good, current and former members of The Grateful Dead have on occasion played with DSO.  And in fact, the night after I saw them at The Fillmore, Phil Lesh joined DSO on stage for the entire first set.  I missed it by that much...

Ok, even without Phil Lesh with the band, it was still an outstanding show.  As it turns out, it was a setlist from Pine Knob, Michigan in 1991, after the release of "In the Dark" which included the band's only chart-topping single "Touch of Grey" and resulted in the album going to Double Platinum status, a first in their career.  While purists might prefer an earlier era, no one was complaining Friday at The Fillmore.

My buddy Alex scored balcony seats with a great unobstructed view of the band.  I managed to shoot a few songs, but I was sitting in the one spot in the whole venue that Fillmore security seemed to pay attention to.  So I got what I got, which was not very much: "Touch of Grey", "Iko Iko", "All Along the Watchtower" and "Mexicali Blues", the last one a song I have never enjoyed.  Unfortunately, some of the songs are interrupted and I was not able to capture the brilliant "He's gone", "Throwing Stones" or "Not Fade Away".

Well, such is life.  At any rate, check out the videos on Youtube, shot with my Sony RX100.  You'll notice some clipping on the adio due to the loud volume.  And be sure to checkout DSO on the rest of their 2012 tour as they make their way east across the country.