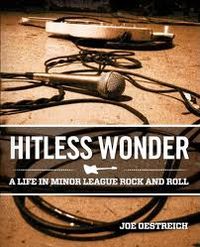 I've read a lot of books about rock and roll: biographies about the Rolling Stones, Aerosmith, the Beachboys, Guns n Roses, the Doors, the Clash, the Stranglers, Sex Pistols, Ramones, Kiss, Anvil and probably a dozen others.  But none of them hold a candle to the story of Watershed as told in Joe Oestreich's "Hitless Wonder".

I first heard about the book on NPR Weekend Edition and bought it immediately.  I devoured it in about 3 sittings.  But it's not your typical rock and roll book with a story arc from obscurity to fame and fortune.  It starts in obscurity and it pretty much ends there.  Watershed scored a mid-90's record contract with Epic Records, signed on with legendary producer Jim Steinman and opened for bands like Cheap Trick and the Smithereens.  They developed a huge following in their home state of Ohio which they hoped to launch nationwide.

Unfortunately, Watershed fell victim to record label politics, bad timing and changing musical styles. But where most bands would have broken up and called it quits, Watershed soldiered on, touring and releasing albums without ever having a hit record.

"Hitless Wonder" tells a compelling and lighthearted story about a band that you've probably have never heard of, but should have.  If you're willing to look beyond the rock & roll clichés of groupies, drugs and million dollar bashes and want to understand how 99% of all rock musician's who live in the minor leagues, you'll find a touching story about music, friendship and perseverance while riding in a cheap rental van and playing gigs to audiences that don't always outnumber the band.  When you finish, you'll wish that Oestreich would have added another hundred pages so you could go on reading.  It's that good a book.

By most quantifiable standards, playing in a rock band is stupid. Five paying civilians at five bucks a head means come 2:00 a.m., Watershed will make twenty-five dollars at the door. Divided by the four guys in the band, that's $6.25 each. But nobody will pocket his six-and-a-quarter. We almost never see any cash. Instead we pay. For the gas. For the hotels. For the trips up and down the Wendy's Supervalue Menu. We dig into our pockets to cover five or six shows in a row, hoping to eventually land a high dollar gig that will get us all reimbursed. Sometimes this gamble works, sometimes not. On our most lucrative tours, we come home with a hundred bucks or so. Usually we lose twice that. So we bankroll the gigs the American way: with credit cards. Rock now, pay later. Even Biggie, the tour manager, is out here on his own nickel. The only member of the Watershed camp guaranteed to land in the black is Ricki C., who works for the cut rate of twenty-five dollars a day. And he only turns a profit because he can eat for a week on Hostess cupcakes and skim milk...

In the years since, we've played over a thousand shows, in thirty-four states and 116 cities. We've humped our amps through the doors at CBGB ten times. We've played the House of Blues on the Sunset Strip, The Metro in Chicago, The Rat in Boston. We've played on South Street in Philly, on Sixth Avenue in Austin, at the 7th Street Entry in Minneapolis, and above a gay bar called Rod's in Madison. We've played fifty-eight different venues in Columbus alone. Small's Bar is the fifteenth place we've played in Detroit. We've released six full-length albums; a batch of cassettes, 45s, and EPs; a couple videos; and a DVD. Colin, Biggie, and I have been together longer than The Beatles, The Doors, and Nirvana combined.

Watershed's long haul hasn't been all sparse crowds and dive bars. At one point we almost made it. We were limo'd around Manhattan. We recorded in the same studio as AC/DC, Aerosmith, and Springsteen. We played arenas and amphitheaters, headlining shows in front of thousands, opening for bands everybody's heard of. We were treated to fancy dinners and promised by insiders that we were the Next Big Thing. But we never had a hit song. Never had a video on MTV. Never won the notoriety that comes measured in songwriting residuals or on the Billboard Hot 100. And yet somehow we've stayed in the game for two decades, like a hustling utility man with a great glove but no bat, a hitless wonder.

If you're curious about Watershed's music, here's a short video from their latest album Brick & Mortar which is also available for streaming from their website.  Their music is just as good as the book and filled with great melodies, pop hooks and humor.  I hope they'll get back on the road for a west coast tour sometime soon.