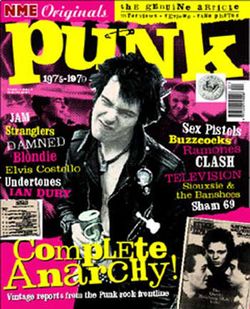 One of my favorite public radio shows, Sound Opinions, featured a two-part retrospective on 1977 - The Year That Punk Broke.

In 1977, I was just 15 years old and my high school buddy Patrick introduced me to the music that was coming out of the UK at the time and it had a profound impact on me.  The podcast does a good job capturing the energy of punk music coming out of London and New York from 1977 and highlights the contributions of the Sex Pistols, The Clash, Ramones, Television, Richard Hell and the Voidoids, Blondie and Talking Heads.  Regretably Sound Opinions missed out on some bands that I think were just as influential: Elvis Costello, The Jam, The Stranglers and The Boomtown Rats also released their debut albums in 1977.  While some of these bands were punk, others were considered New Wave and still others were just a reversion back to a rawer roots rock style.

When I think back to 1977, it's remarkable both how much good new music came out as well as how much absolute dreck was on the airwaves.  Top albums of 1977 included the likes of Fleetwood Mac's Rumors, Pink Floyd's Animals, David Bowie Low, Steely Dan Aja, Meat Loaf Bat out of Hell and Jackson Brown's Running Empty.  The contrast is crazy.

There's a timeless, edgy quality to many of these bands that stands the test of time.  Television's debut Album "Marquee Moon

" remains one of my favorite albums and sounds as fresh and intriguing today as it did 35 years ago.

Unfortunately, very few of these bands endured.  Some, like the Sex Pistols and Television all but disappeared within a year or two, though their albums have been hugely influential.  Although The Stranglers and Hugh Cornwell continue to tour, they are at best cult bands.  Arguably only Paul Weller of The Jam and perhaps Elvis Costello have the broad recognition that's deserved and continue to make music that's relevant today.

The music of 1977 definitely jolted the music industry.  In the next couple of years bands like The Rolling Stones, The Who and Neil Young & Crazy Horse were incorporating a rawer rock sound, while new bands like The Police, The Smiths, The Buzzcocks and U2 were inspired by the sounds of 1977.  In subsequent posts, I'll take a look at some of the most important albums and bands of 1977s.

Did you listen to these bands in 1977?  See them live?  Add a comment and let me know your thoughts.

I was 7 years old in 1977. When I`m listen many of these old rock bands today, they will feel just better and better.