The first workout for my Sony RX100 was a short trip to many of Austin's great blues clubs a couple of weeks ago.  As luck would have it, Jimmie Vaughan was in town playing at Antone's.  I had seen him play this same venue twice earlier in March and July 2010, which I had shot with my trusty Canon G9.  While it's not a perfect side-by-side comparison, it is the same venue, the same opening act, and similar songs.  I also happened to be standing in pretty much the same spot, at the left hand side about 3 feet from the stage.

Here's the best shot I managed to catch of Jimmy with the G9.  (Ok, he doesn't smile too often.)  You can see that there's a lot of noise in the photo and there's an overall washed out look, especially if you click to examine at it at full size.  This was shot using the High ISO setting of the G9, which is pretty much the only setting that will work in a concert venue. 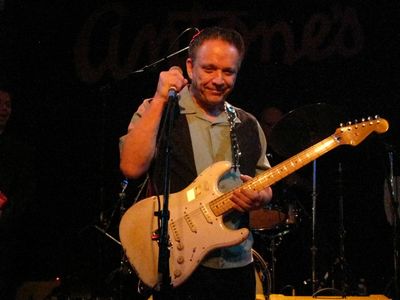 Here are some more shots with the Canon G9 I posted at PicasaWeb.

And here are several songs from July 2010. Note that the first two songs in the playlists for the two cameras are the same, giving an easy way to compare the quality.  Sound quality from the G9 has always been exceptional.  You can hear the guitar, bass and drums quite distinctly, especially on Jimmie Vaughan's songs.

Overall, I've thought my Canon G9 did a pretty good job on concert photos and videos.  But when you put it side by side with the more modern RX100, there's no comparison.  The G9 photos like intolerably grainy.  Not only is the RX100 slimmer, lighter and faster to shoot with, it's going to deliver much high quality photos in concert settings.

The RX100 did a much better job of getting low-light photos at required high ISO settings without the noise seen on the G9.  The blacks look much blacker and the photo of Vaughan with his white strat has a very dramatic contrast. 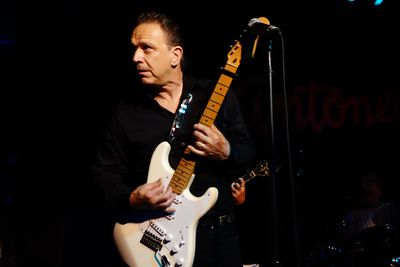 Again, not a lot of smiles from Mr Vaughan, but the RX100 burst mode enabled me to get at least one.  I've also included some shots of the opening band, The Bluebonnets, as well.  All photos were shot in Program mode with an ISO of 3200 (and occasionally 1600) and are uncropped and unprocessed.

And here are several songs by Jimmie Vaughan, Lou Ann Barton and the Bluebonnets.  Again, note that the first two songs are the same as the earlier gig which used the Canon G9.

Viewing the videos at high resolution / full screen settings reveals just how much video quality has improved in the 5 years since the G9 was first launched.

The Sony RX100 does a much better job with both low-light concert photos and with higher resolution video.  By comparison photos from the G9 are a lot noisier at high ISO settings.  The RX100 focuses faster, has a better burst mode and generally, higher quality images.  Despite the fact that the G9 has a bigger zoom, I think in most cases, the RX100 will deliver more better quality pictures because of it's faster lens and larger sensor.  I also think a lot of the Auto+ and creative filters are great additions to the RX100.  The only downside of the RX100 high resolution video is that it makes for some pretty large files and lengthy processing and upload times.

However, while the video quality is excellent, I'm not convinced the audio from the Sony RX100 is better; in fact I'd say the audio quality is worse than the G9.  It's boomier and has a more washed out sound and is more likely to clip at very high volumes (above 100 db).  For blues or jazz, that may not be an issue, but if it's a deafening head-banging metal band, sound will be distorted.

That said, I think both cameras do a good job on audio and are much better than the Fujifilm X10, Canon S100 and most other point and shoots.  But this may be a question of personal preference more than anything else.  It's also possible that by setting the Wind Noise Reduction ON, it may sound better, though I've not been able to tell the difference myself.

I've added a few more recent reviews following my first impressions post.  Let me know what you think in the comments below. 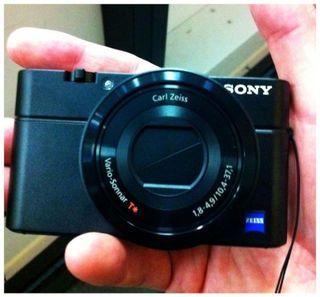 I've been jonesing to buy a new compact digital camera for a couple of years.  I love my Canon G9, but it's several years out of date and while I think it does great for concert videos, it's not a great camera for low-light venues.  High ISO pictures have a lot of noise.  Still the camera is very compact, relatively easy to smuggle into venues and the audio quality is superb.  So I passed on the FujiFilm X10 (poor audio), the smaller Canon S100 (poor audio) and the Canon G1X (too large.)

But a few days ago, I managed to pick up Sony's newest compact digital camera the DSC RX100

.  On paper, it looks outstanding: 8 oz, very small, F1.8 Carl Zeiss lens, built-in effects, etc.  It's not cheap ($650) but if it can get better shots than the G9, what the heck.  The first camera I got was dead after half a dozen shots; it would no longer read any SD card.  Sony let me swap out the camera at a store, which was very gracious of them.  One clear challenge: shooting videos in 12M 1440 x 1080 resolution makes for some pretty massive files.  Converting a 7 minute file to 720x 1080 took about 45 minutes on my Macbook Air and another 40 minutes to upload to YouTube.  While it's to have that kind of higher resolution, I don't think it would be practical when shooting half a dozen or more songs as I usually do.  I wish there was an MP4 resolution halfway between the high res 1440x1080 MP4 and the low-res VGA 640x480.  That would save a lot of processing and uploading time.

Here's a sample video in MP4 at a local Austin blues jam held at Jax Neighborhood Cafe.  It's a nice venue with good lighting and the sound was around 96db, so not deafeningly loud.  You can click on the video to view it fullscreen.

And here's  another sample shot in AVCHD. (That's me singing slightly off-key.)

The RX100 did a good job capturing the sound, but it sounds like it is very close to distorting at high volumes.  Or more likely that's just the crappy Fender JAM sold-state amp I was using.

Here are some videos from Antone's featuring the Bluebonnets, Nick Curran and Jimmie Vaughan.  These were all shot in 12MP MP4 1440 x 1080 resolution and, I uploaded the files directly to YouTube without the tedious conversion process used by iMovie.

And some more video shot at 640x480 VGA resolution.  By default iMovie crops these films before uploading for reasons I don't understand, so they come out slighlty worse looking than if you upload directly as they get scaled to some other resolution.  (Lesson learned!)  I re-uploaded most of the videos directly to YouTube to avoid this problem.  But you might notice a couple are still fuzzier than they should be.  Also the louder songs by Dave Grisson appear to distor the sound.

And here are some still shots at PicasaWeb from various live venues.   All were shot as 20 MB JPEGs and mostly using automatic Program mode (P) at automatic ISO.  Occasionally I tested out 1600 ISO or 3200 ISO as well as the SCN High ISO or Auto+ settings.  Note all photos are uncropped and at the original resolution.  I've still got plenty more photos to upload next couple of days.

And here are some shots of a band where I used some of the creative filters built-in to the RX100.  Some look a bit over the top, but if used sparingly they can be interesting.

So far, I would say the RX100 is a nice, small and unobtrusive camera.  It focuses quickly and has the requisite number of dials, nobs and menus to let you control the photos and adjust for lighting.  Overall, it appears to be faster at focusing and shooting than the G9, and it performs reasonably well in tricky lighting situations.  But at $650, it's probably the most expensive point & shoot cameras out there.  And you've still got to shoot a lot of photos to get a few that capture the right expression and I have many photos where something isn't exactly right.

And there are two significant drawback to keep in mind, relative to the G9.  When shooting in burst mode, it can take 10 seconds or more before the camera is ready to take another shot.  And the audio definitely clips at lower volumes than the G9.  Most of the time it should be fine but at very loud shows (over 100db), you can hear some distortion.  Hard to say how the G9 would have done under the exact same circumstance, but in several years of shooting the G9 it only distorted audio twice.

Not surprisingly, the Sony RX100 is getting great reviews; I've posted links to a few below.  More comments to follow. 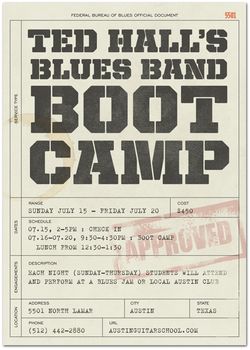 National Guitar Workshop (NGW) has unfortunately filed for Chapter 7 bankruptcy canceling the summer's workshops.  This is quite unfortunate, especially for students like myself who have prepaid and made non-refundable travel arrangements. And who knows whether there will be refunds forthcoming or not.

For those already committed to travel and seeking alternative arrangements, I know of at least two events that are being scheduled for Austin and DC area.

Please help spread the word on these events.  Or if you know of other events that might coincide with NGW's previously scheduled classes, please add to the comments below.

In case you have any doubt about Ted Hall's chops or instructional abilities, here's a video of him ripping it up on Black Magic Woman from NGW Austin last year.

Ever heard of Watershed?  Me neither.  But they've got a fascinating story.  A hard work Ohio band that never quite made it, but never gave up.  They're still touring after 27 years.  I must admit, I'm a sucker for bands with this kind of endurance, whether it's The Cynics, Anvil, The Hellacopters, or Thunder.  Watershed is probably the most accessible of any of these bands, with a mainstream pop sound.  Bass player and singer Joe Oestreich has recently written a memoir called "Hitless Wonder" describing the band's career which is featured on NPR Weekend Edition.

I'll follow up with more details after I've dug into the book.  But so far, Watershed sounds pretty darned good.  Classic rock & roll power pop with a sense of humor and plenty of hooks.  Sort of a combination of Cheap Trick and Greenday.  Their newest album Brick & Mortar is available for streaming from their website.  And here's a video from a recent gig.  I hope they'll add some west coast tour dates soon!

Update: I bought the book and devoured it. Best rock book ever!  I bought the album "Brick and Mortar" and loved it.  Watershed is my new favorite band.  Heck, I've bought 3 more CDs on Amazon.  Full reviews to follow.