Joe Bonamassa: Driving Towards The Daylight 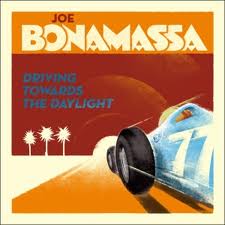 I've been a fan of Joe Bonamassa since I managed to see him live in Santa Cruz a few years ago.  That was one of the best shows I've seen.  Bonamassa has been playing since he was 7, and now at the ripe old age of 35, he has the chops to show for it.  He's also one of the busiest musicians around, recording and touring with his own band as well as with the rock supergroup Black County Communion.  But for me, Bonamassa is best when he plays the blues.  And this latest album "Driving Towards The Daylight

" is a return to the hard-rocking British blues style that first put him on the map.

Bonamassa brought in some new musicians for this album including Anton Fig (David Letterman's band, Kiss) on drums, Brad Whitford (Aerosmith) on guitar, and Jimmy Barnes on guest vocals.  I think this is Bonamassa's best album.  Many of the tracks are classic blues songs from artists like Robert Johnson, Howlin' Wolf, Koko Taylor, but updated with powerful blues rock energy.  But don't pass judgement too quick on the first couple of songs.  The album definitely builds, like a burning blues solo, and achieves real heat.

My only disappointment is that Bonamassa hasn't made it out to California this year.  But hopefully 2013.  And if you should find him within 100 miles, believe me, it's worth the trip to see him live.  Otherwise, this new CD and the DVD "Live From New York DVD

" will have to suffice. I got an email about an interesting Kickstarter project called "The Unlimited Electric Guitar" by a company called Unplugged Instruments.  This is an offshoot of a Stanford electrical engineering project that combines an electric guitar with a built-in speaker and some custom iPhone apps.  It looks promising, though the project doesn't have the huge ambition of gTar (nor the polish.)  But for someone who actually can play the guitar, it's actually more appropriate.

Check out the detailed video and consider making a donation to back this project.  But, as with most instruments, it's not a cheap project.  $275 will get you the finished guitar and they are aiming to raise $50k with more than half still to go in the next 20 days.

Update: I received some additional information from the team behind Unlimited Guitar.  They will be building out additional instruments including bass, keyboard and drums, each with built in iPhone interface and speakers.  (Not sure what that means for drums, but I'm sure it will be interesting.)  In addition they are working on "Guataraoke" style backing tracks so you can play along with your favorite songs, interactive lessons and more.  So far the team has garnered interest from heavy weights in the music industry including GuitarCenter and ZT Amplification.