The Cynics in Europe 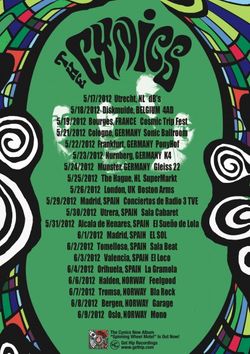 Ok, I'm jealous.  I've only recently been introduced to The Cynics, one of the greatest garage bands ever.  My brother saw them live in Toronto and bought me a CD.  This is one tremendous band.  I've bought four more CDs since then and they are all fantastic.  The band has been around for 30 years and it's interesting to hear how they've evolved.  There's a definite "Nuggets" influence in the early work and then later songs have become a bit more polished, but still full of raw energy.  Hard to explain, but if you like the Beatles, The Ramones, The Buzzcocks or other high-energy bands with a great sense of melody, then this might be up your alley.

While The Cynics have never had great acclaim in the US, they've got a huge following in Europe, especially in Spain.  And in fact, they are currently on tour in Europe.  They've been in the UK and Germany and still have shows to go in Spain and Norway --of all places.

Heck, if they can tour in Norway, you'd think they'd be able to make it to San Francisco. Come on, guys, how about it?

If you're not familiar with The Cynics, I encourage you to check them out on Amazon or on their MySpace or Facebook pages.  Here's a video from their 2011 Album "Spinning Wheel Motel